On the trail with Mike Pence: Putting out fires lit by Trump 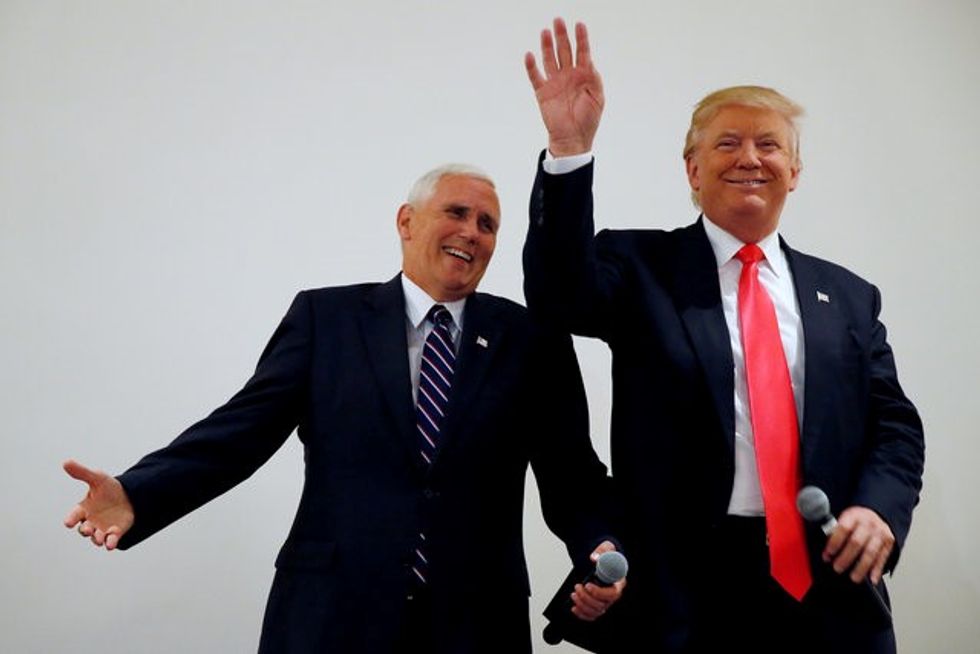 If Mike Pence had any doubts about what life would be like on the 2016 Republican presidential ticket with Donald Trump, the past week will have erased them: He is the damage control guy.

The Indiana governor who swore off political mudslinging years ago heard Trump call Democratic rival Hillary Clinton "the devil" and watched him fan the flames of a feud with the parents of a Muslim soldier who died saving U.S. troops in Iraq.

Unlike many vice presidential running mates, the mild-mannered Pence was not tapped as the attack dog in the Nov. 8 presidential election. Trump has that part down pat.

Pence's job is harder: softening Trump’s rough edges and limiting the fallout from what many Republicans see as the nominee’s self-inflicted wounds.

A week ago, for example, Pence rowed back on Trump's blacklist of some media outlets, saying the campaign is discussing changing course.

Last Sunday, as Trump's dispute with the parents of slain U.S. Army Captain Humayun Khan boiled over, Pence issued a statement praising the soldier as an “American hero” and saying that his family “should be cherished by every American.”

On Wednesday, Pence offered his own endorsement to House of Representatives Speaker Paul Ryan, the top U.S. elected Republican, after Trump infuriated many party leaders by declining to endorse Ryan in his re-election bid.

Pence, who swore off negative campaigning after losing a vituperative congressional race in 1990, eschews name calling. Trump, by contrast, delights in using monikers such as "Crooked Hillary" and "the devil" to describe Clinton.

Trump has made clear he values Pence, telling a rally on Thursday in Portland, Maine, that he and his running mate have a "great relationship."

But Pence must walk a fine line.

Even as he defuses Trump's verbal bombs, Pence must be careful to show he knows who is boss. He also has to stick to his own principles while not appearing to be trying to undermine the man who chose him as his No. 2.

Should Trump win, Pence, a former congressman, could serve as a conduit to the U.S. Congress. But if Trump loses, Pence could emerge as a possible White House contender for 2020.

“He should have expected he would do some of this and provide more of the even-tempered, articulate, measured responses,” Black said.

But Republican strategist Ryan Williams said Pence is in an “impossible spot” and said that Trump’s missteps could cast a shadow over his running mate's political future.

“Mike Pence is a good Republican but unfortunately he will be associated with the controversies that have ensnared the Trump-Pence ticket and will be tied to whatever the consequences of this election are,” Williams said.

Trump's off-the-cuff insults and controversial proposals, such as a temporary ban on Muslims entering the United States and a plan to build a wall along the Mexican border to keep illegal immigrants out, have made many in the party establishment uneasy.

The Republican nominee's feud with the Khan family made for an awkward moment for Pence at a campaign event in Carson City, Nevada. A military mother asked Pence how could he tolerate Trump's disrespect for the armed forces, which prompted boos.

Pence was asked on Thursday by an 11-year-old boy at a North Carolina rally if his role was "softening up" Trump's policies and words.

Pence replied that he and Trump were "shoulder to shoulder" in the campaign.

Christopher Devine, co-author of the book “The VP Advantage” and an assistant political science professor at the University of Dayton in Ohio, said that if Trump loses the November election, Pence may try to position himself as a conservative bridge between Trump supporters and traditional Republicans. That may be an added reason for Pence’s cautious approach.

"He has to be very careful about how he handles the defense of Donald Trump," Devine said.