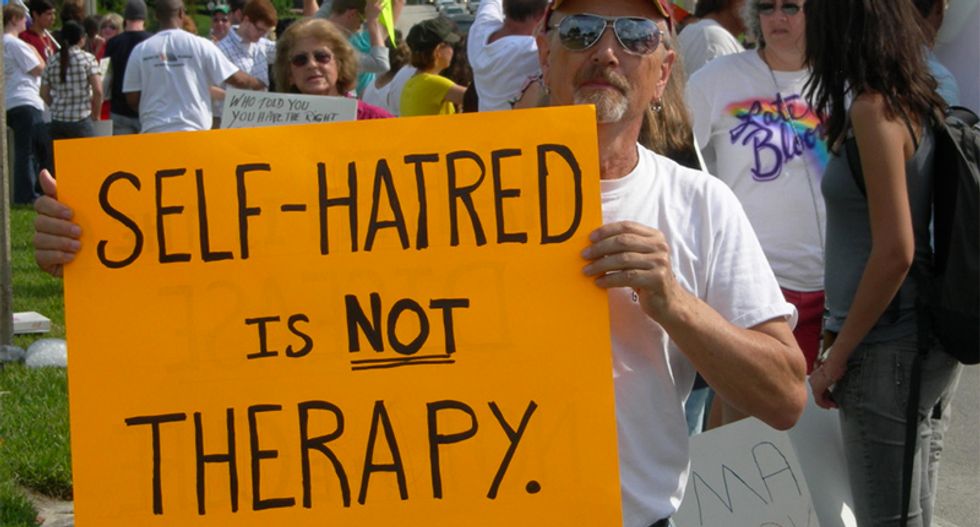 After Illinois passed a ban on so-called "conversion therapy," five pastors launched a lawsuit, insisting that they can "cure" LGBT people from their affliction.

"The American Psychological Association affirms that same-sex sexual and romantic attractions, feelings, and behaviors are normal and positive variations of human sexuality regardless of sexual orientation identity," the resolution states.

Illinois, like many states, passed legislation called the Youth Mental Health Protection Act, to ban the practice of a "failed and discredited non-therapy that attempts to change the unchangeable," as Equality Illinois put it.

But now five pastors have come together to sue based on religious freedom. They believe they should be exempt from the bill because of their religion and designation as a church and religious institution. Like many churches and religious businesses over the years, when they see a law they don't like they claim First Amendment protections. This argument could be made with any law, however. There could be an argument that slavery and servitude not to mention abuse of one's children and family could be sanctioned by The Bible, and thus laws outlawing it should be allowed in the church as part of a "religious freedom" exemption.

Pink News reports Pastor Steven Stultz of Nu-Church Apostolic Ministries of East Garfield is one of those seeking to use the torturous technique on LGBT people. Claiming, “In 1 Corinthians 6:9, the Apostle Paul writes to those who had overcome many sins including homosexuality, stating, ‘such were some of you’ but you were changed through God’s healing," he said. "I have personally witnessed many people change their sexual orientation through counseling and know it is possible. The government is interfering into someone’s private decisions. This ban on counseling creates fear in the people most in need of comfort and support.”

The pastors' attorney insists this is a ban on those who seek spiritual guidance at difficult times where they are questioning their sexual orientation.

"Each person should be free to receive Biblical and spiritual counseling from the pastor of their choice to help them orient their sexuality," said John W Mauck from Mauck and Baker LLC.

Most recently, a Texas teen was forced into a "pray away the gay" boarding school after she tried to take her girlfriend to the prom. The litigation in her case is ongoing and the court documents have been sealed, but she was ultimately released, after trying to escape.