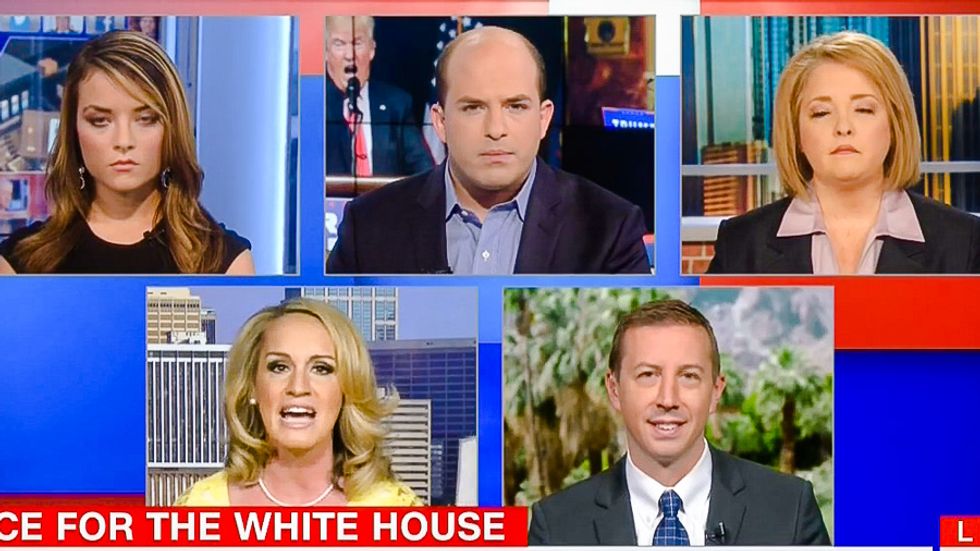 Four Donald Trump supporters insisted on CNN over the weekend that recent polls could not be trusted because they were "skewed" in favor of Democratic presidential nominee Hillary Clinton.

Kremer agreed that Clinton had received a bump after the Democratic National Convention, but she speculated that voters would come back to Trump after the Labor Day holiday.

"You know, polling can be skewed too," Kremer opined. "By the way the questions are [asked], the number Democrats versus Republicans that are polled. So, you can't say that there's not any bias in the polling because I believe there certainly is."

"Supporters were convinced he was going to win when he wasn't," Stelter reminded the Trump surrogates.

"A poll is only a snapshot in time," Kremer insisted. "If people really want to elect Donald Trump, they need to be out there working for Donald Trump until the last ballot is cast."

"But what if I take like 50 snapshots?" Stelter pressed. "The Real Clear Politics average has Clinton up by 7 points, that's outside the margin of error."

Scottie Nell Hughes interrupted to argued that a recent Georgia poll [by the Atlanta Journal Constitution] showing Clinton ahead had surveyed more Democrats than Republicans.

"So when you look at that number, of course the percentage is going to be more skewed in Hillary Clinton's favor," she said. "They also weighted the poll differently in August, where they put more weight on the African-American vote, the female vote and the youth vote. Three areas that Hillary Clinton does well on."

"That's why when people see these polls, it's more important that they go and they get their own research, they pull the numbers themselves," she added.

"Is it dangerous to tell fans to not believe the polls?" Stelter wondered.

"I didn't say don't believe it," Hughes replied. "I said, do your research."

In its pollster grading, Five Thirty Eight noted that the Atlanta Journal Constitution's polling service, Abt SRBI, had a track record of calling races 100 percent correctly for Time magazine. Five Thirty Eight gave the pollster an overall grade of A-, with a slight bias of 0.4 percent for Democrats.

Watch the video below from CNN's Relibable Sources, broadcast Aug. 7, 2016.