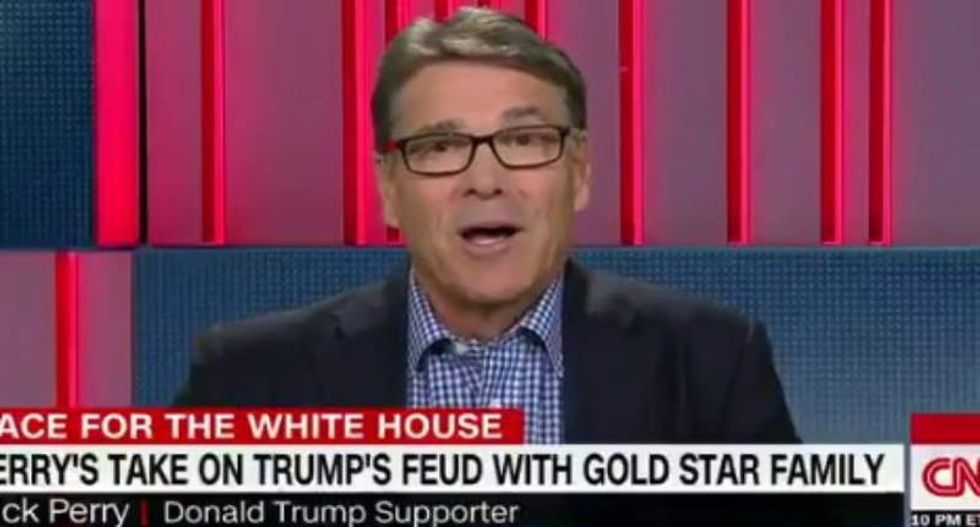 "Because he had a son that he lost to terror, that gives him a free ride to say what he would like against a candidate that he's not for?" Perry asked Tapper. "That's not proper, that's not correct."

Perry added, "No one has done any more for our veterans, I would suggest, than I have" to argue that he understood the pain bereaved military families go through.

"But don't use that and go after a political candidate and think that you're gonna get a free ride," he repeated.

Khan, who was joined on stage by his wife Ghizala, denounced Trump at the Democratic convention for proposing a ban on Muslim immigration into the US. The Khans' son, Army Capt. Humayun Khan, was killed in service in Iraq in 2004.

As the Texas Tribune noted, Trump came under widespread criticism -- including from Texas Gov. Greg Abbott (R) -- after suggesting that Ghizala Khan was not allowed to speak during the event. But Perry argued on Tuesday that Khan instigated Trump's attack after he "struck the first blow."

"In a campaign, if you're going to go out and think that you can take a shot at somebody and not have incoming coming back at you, shame on you," said Perry.