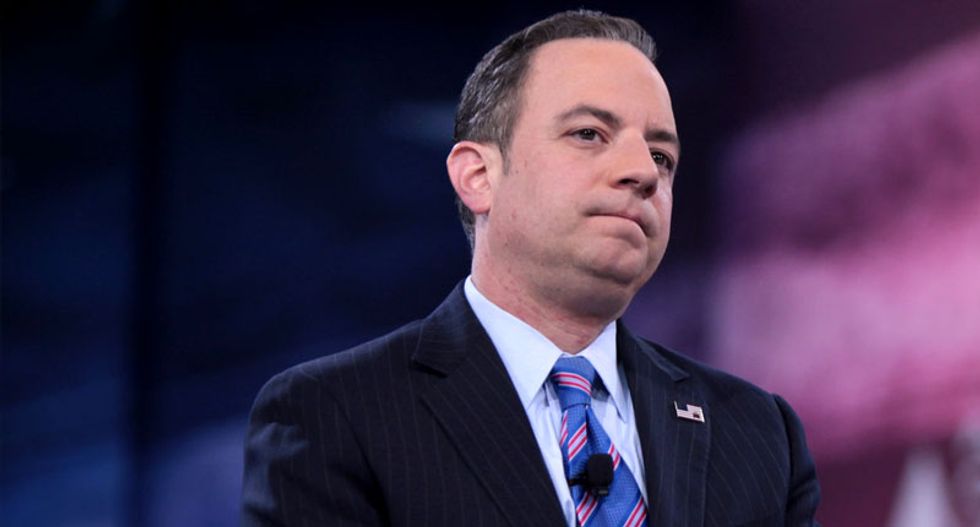 Donald Trump's White House campaign was in turmoil on Wednesday, with a senior Republican Party official furious over his criticism of a dead soldier's family and his refusal to back the re-election campaign of House of Representatives Speaker Paul Ryan.

Trump hit back on Tuesday at critics in the Republican leadership who have taken him to task for his insistent public dispute with the parents of the soldier, a Muslim U.S. Army captain killed in the Iraq war. In a revolt against the party, he denied both House Speaker Paul Ryan and Senator John McCain support in their re-election bids.

Republican National Committee Chairman Reince Priebus was furious over the failure to endorse Ryan, who is the most senior elected Republican, and over Trump's feud with the Khan family, two Republican sources said.

"He feels like a fool," a Republican source familiar with the situation said.

More any other major figure in the Republican establishment, Priebus worked to bring Trump into the party's fold despite the New York businessman's status as an outsider. Trump, who had never previously run for public office, broke with party orthodoxy as he beat 16 rivals to become the White House nominee for the Nov. 8 election.

Ahead of last month's Republican Party Convention, the RNC sought to rally the fractured party behind Trump. Priebus feels burned by Trump's string of self-inflicted wounds and his refusal to observe basic decorum by giving Ryan his support.

Trump, who made his comments about Ryan and McCain in an interview with The Washington Post, shrugged off the growing party backlash.

"There is great unity in my campaign, perhaps greater than ever before. I want to thank everyone for your tremendous support. Beat Crooked H!" he wrote on Twitter early on Wednesday, referring to his Democratic rival, Hillary Clinton.

Campaign manager Paul Manafort sought to reinforce the message, telling Fox News Channel the campaign was moving in a positive direction, with the candidate himself in control.

"The campaign is in very good shape. We are organized. We are moving forward," Manafort said.

However, a Republican source said Manafort was struggling to get the candidate back on message.

Trump's always unruly campaign has been wracked by turmoil in recent days. On Monday, he fired a senior adviser, Ed Brookover, who had been hired to serve as a liaison between the campaign and the Republican National Committee.

Trump has had a running dispute with the parents of Army Captain Humayun Khan since they took the stage at last week's Democratic National Convention. Khizr and Ghazala Khan cited the sacrifice of their son, who was killed by a car bomb in 2004, and criticized Trump's proposal to combat terrorism by temporarily banning Muslims from entering the United States.

Many Republican leaders, including Ryan and McCain, have criticized Trump's subsequent attacks on the parents. Several media outlets reported on Wednesday that Trump had rejected advice from his staff to drop the dispute.

The dispute over Trump's treatment of the Khans was the latest rift in a party frayed by dissent over the candidate.

Also on Tuesday, Representative Richard Hanna of New York became the first Republican in Congress to endorse Clinton, although several other Republicans in Congress have said they will not support Trump. Even Trump's longtime ally, New Jersey Governor Chris Christie, said it was inappropriate to criticize the Khan family.

In better news for Trump, his campaign and the Republican National Committee jointly raised $80 million for his White House bid in July, the campaign said on Wednesday. That was less than the $90 million Clinton raised along with the national Democratic Party the same month, but it was a substantial bump from his fund-raising in past months.

Trump was late to kick off traditional campaign fund-raising efforts, preferring to largely use his own funds during the Republican primary. He has contributed more than $56 million to his presidential run so far, the campaign said. In June, after hiring a national finance chairman and launching a collaboration with the RNC, Trump brought in $51 million.

A former reality TV star with a propensity for free-flowing insults, Trump has won support particularly from white blue-collar workers who feel neglected by the political establishment. His plans have included the ban on Muslims, building a wall along the Mexican border to keep out illegal immigrants and renegotiating trade agreements.

On Tuesday, Democratic President Barack Obama unleashed his strongest attack yet on Trump, calling him unfit for the presidency and asking Republican leaders why they continued to endorse him given their repeated criticisms of his actions.

Opinion polls have shown Clinton benefiting from a boost after her party's convention last week. The RealClearPolitics average of recent national polls put her 4.5 percentage points ahead of Trump, at 46.5 percent to 42 percent.