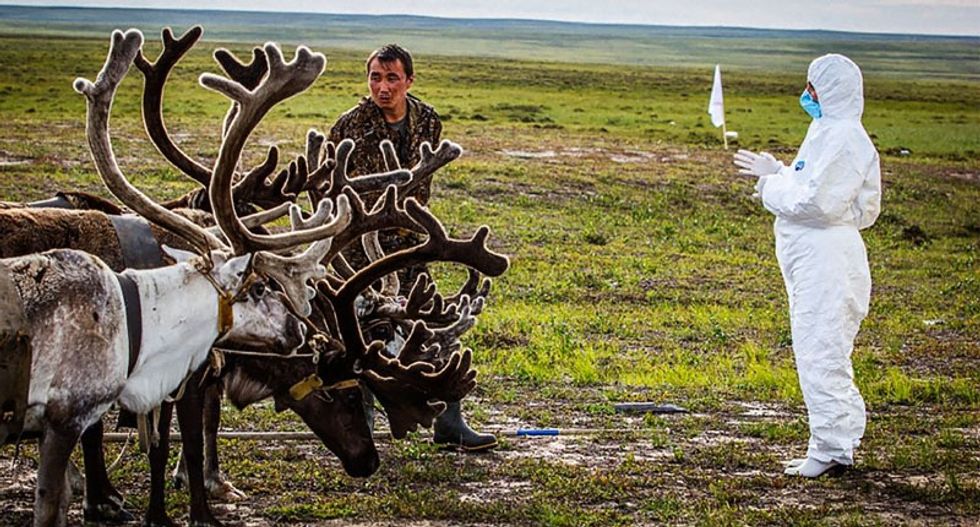 A veterinarian takes a health checkup of deers outside Yar-Sale town at Yamal Peninsula in the far north of Russia, following a recent anthrax outbreak (AFP Photo/-)

A recent anthrax outbreak in the far north of Russia left a child dead, 23 people infected and the government scrambling to deploy hundreds of rescue workers and soldiers to stop any further spread.

The source, scientists say, seems likely to have been the long-buried corpses of reindeers on Yamal peninsula uncovered as Russia's permafrost melts -- and then been passed on to grazing herds.

The fear now is that this is not a freak incident and that other diseases -- some dating back to the Ice Age -- could be unleashed as global warming thaws Russia's icy northern expanses.

"Most likely the source of the epidemic were the thawing animal burial sites for animals that died of anthrax 70 years ago," said Boris Kershengoltz, chief of research at the Russian Institute for Biological Problems of Permafrost Zone.

"Can these processes repeat themselves? Of course they can," he told a press conference last week.

Russia is warming about 2.5 times more rapidly than the world's average, and the Arctic region is warming quicker than the rest of the country.

Yamal, the peninsula straddling the northern Kara Sea and the Gulf of Ob, is sparsely populated by mostly indigenous nomadic reindeer herders. Temperatures there in July were up to eight degrees higher than normal, reaching 34 degrees Celsius (93.2 degrees Fahrenheit).

"Imagine Yamal, we are talking about a place above the Arctic Circle," said Sergei Semenov, director of Russia's Institute of Global Climate. "This is a colossal, unprecedented anomaly."

Anthrax is an infection spread by spores of the Beacillus anthracis bacteria which occurs naturally and can be ingested by livestock and passed to humans, usually through skin contact, causing black lesions. If left untreated it can be fatal.

Besides anthrax, there are plenty of other dangers lurking in shallow Arctic graves which might be unlocked from the ice after centuries, said Viktor Maleyev, deputy chief of Russia's Central Research Institute of Epidemiology.

"We had smallpox graves" in the Far North at the end of the 19th century, and scientists are discovering new "giant viruses" in mammoths, he said. "Their pathology has not been proven, we must continue to study them."

"I think climate change will bring us many surprises," he said. "I don't want to scare anyone, but we should be ready."

Maleyev added that the anthrax crisis could have been avoided or lessened if reindeer, which were presumably infected by grazing over the anthrax graves, had been vaccinated en masse.

"Animals have to be vaccinated regularly," he said.

Governor Dmitry Kobylkin of the Yamalo-Nenetsky region, where over 2,000 reindeer died, said vaccinations stopped about a decade ago, possibly after an erroneous decision that the region was safe from anthrax.

He called the decision a "very serious mistake."

He said Tuesday that the total affected area in the region, together with an established buffer zone, is some 12,650 square kilometres (3.1 million acres).

"The process of disinfection will go on until soil analyses say that there is no anthrax in the area," he said.

"It is unlikely that anything will grow there ever again."

Over 1,500 people have been vaccinated, while 706 are receiving antibiotic treatment, the regional government said Wednesday. All residents are going through sanitation procedures and being moved to new areas.

Some 270 Russian troops are still working across the territory, burning the infected animal corpses at high temperatures, Kobylkin said, hoping to finish in one week.

"We never considered such a bacterial threat," he said, voicing hope that the outbreak leads to legislative changes.

Scientists lamented that instead of spending more money on studying the effects of climate change, science budgets are shrinking, and the government only allocates funds after emergencies and tragedies.

"There is less and less attention in our country to science, fewer grants for meteorology," said Valery Malinin, an oceanologist from Russia's Hydrometeorological Institute.

He said the government had come up with a climate program in 2010 after deadly smog from peat fires gripped the Russian capital, only to forget about it. The program is now "effectively buried," he said.

"When there are destructive phenomena we think it would be nice to have prevented them, but as soon as the passions die down, everything is forgotten," he said.

"Yamal is just a small alarm bell," he said. "Nature will continue to challenge us."