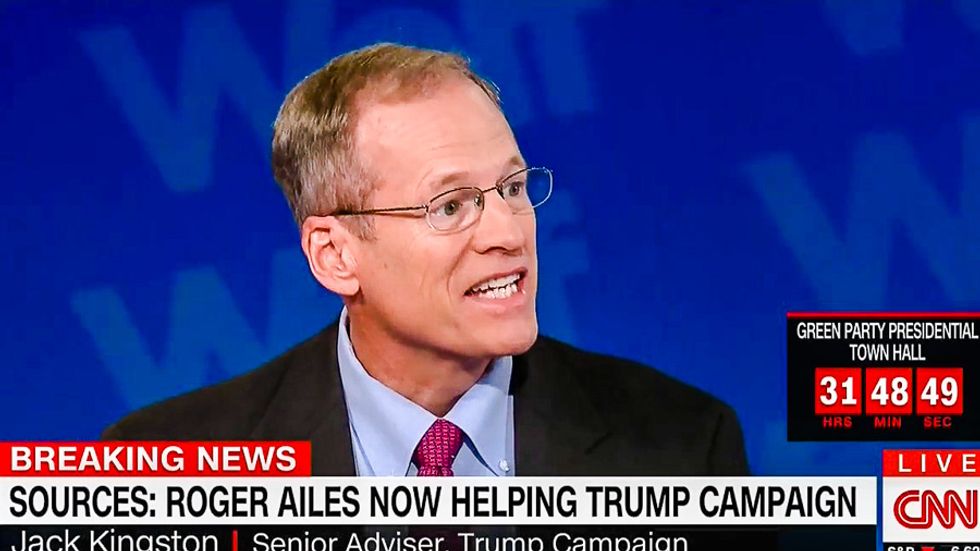 Trump campaign senior adviser Jack Kingston declined on Tuesday to say that Roger Ailes would not participate in Donald Trump's debate preparation, but he promised that the disgraced former Fox News executive would not be providing advice on how to treat women.

"We do know this, that Roger Ailes has tremendous experience in terms of coaching candidates," the former Georgia congressman continued. "He could be a resource for debate purposes. But I think at this point, the campaign is going to look at a lot of options in terms of who might be in the room to coach him and who won't."

Keilar reminded Kingston that Ailes was ousted from Fox News after being accused of sexual harassment by multiple employees.

"He's certainly not going to draw women to Donald Trump," the CNN host noted. "And he's already struggling with them. I see that you're saying, 'Look, this is a guy with a lot of experience, he's done this before, he's an asset.' How is he also not a liability?"

"The campaign is under no obligation to say who's going to be coaching him," Kingston insisted. "But if we're going to count all the sins of supporters, let's start with the most recent Clinton scandal with Kathleen Kane, the disgraced guilty of perjury attorney general of Pennsylvania, who was a Clinton campaign operative and a big endorser."

"Is Hillary Clinton picking her out of the bunch to help prepare for a debate?" Keilar pressed. "That's different. This is moving forward. This is a place where he needs to make progress."

"The candidate has said [Ailes is] not involved," Kingston replied. "And I think that should he become involved -- I think the candidate is going to have to make those decisions. But certainly, Donald Trump would not take advice on employee relations from Roger Ailes."

"Donald Trump is an employer who has had thousands of women work for him," he added. "And his track record is very good in terms of treatment, equal pay, advancement, given titles, letting women run his companies."

"So if he had a pattern of mistreating any type of employees, believe me, in this atmosphere, we would all know about it by this time."