Shut up and play ball: Why America can't handle black athletes who talk about race 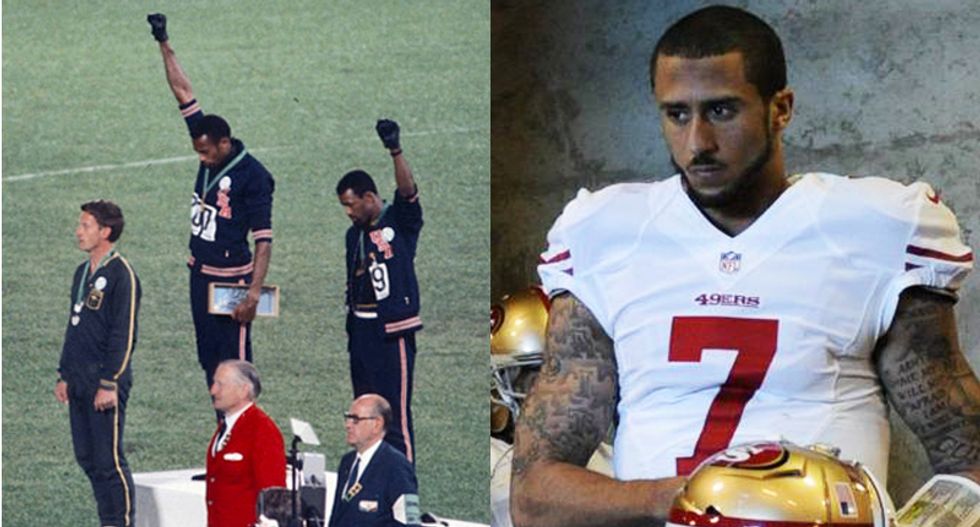 Sometime far in the future, Colin Kaepernick's  decision to sit during the playing of the national anthem will be heralded as another example of a black athlete using his or her national platform to draw attention to the continued mistreatment of black people in the United States. Undoubtedly, former teammates, coaches, and journalists will step forward to present their memories -- seen through lenses covered in vaseline so that the edges are softened and the ugly stuff excised -- in which they will extol Kaepernick for his courage and for his willingness to do the right thing even though he had to know that his act would be deliberately misinterpreted by those whose kneejerk reaction to any critique of the United States is to invoke the bodies of American war dead.

Kaepernick issued a statement through the NFL after the San Francisco 49ers first pre-season game, after he had failed to join the pre-game ceremony of standing for the playing of the national anthem. "I am not going to stand up to show pride in a flag for a country that oppresses black people and people of color," Kaepernick told NFL Media in an exclusive interview after the game. "To me, this is bigger than football and it would be selfish on my part to look the other way. There are bodies in the street and people getting paid leave and getting away with murder."

In the 1968 Olympics, two American athletes and one Australian athlete took on the entire International Olympic Committee in an effort to protest a variety of issues in which the IOC's decisions were making it harder for black athletes all over the world to compete fairly and to live in a just world. Their actions were greeted by the American public -- and by American journalists -- as if they had attempted to burn the Olympic games down to the ground, and they were seen as men who had thought their egos larger than the supposed spirit of the Olympic celebration of international brotherhood (sic). Of course, the Australian athlete, Peter Norman, who took silver, was punished in Australia, which had its own abysmal human rights record toward its Aboriginal population, and the payback for his participation in the protest was that he was never allowed to represent Australia again.

The Mexico City Olympics began under a cloud. Less than two weeks prior to the 200-metre dash final, Mexican troops had slaughtered protesters in Tlatelolco Square. The Games were in tumult as the athletes from around the world continued to foment against IOC Chair Avery Brundage, the American Nazi-sympathizer who had allowed the United States to participate in the 1936 Hitler Olympics despite clear evidence that Brundage had prevented two Jewish-American runners from competing in order to spare Hitler embarrassment.

The issue going into the 1968 Olympics was the objection to allowing Rhodesia, which like South Africa, was an apartheid regime, to participate. Mexican officials refused to recognize Rhodesian passports, which had averted a planned boycott by many African countries, although some went through with their decisions not to participate. But in America, Muhammad Ali had been stripped of his World Heavyweight Boxing Championship on the basis that his refusal to serve in the military -- he claimed Conscientious Objector status -- made him unfit. Martin Luther King, Jr. had been assassinated in April of the same year. It was a volatile year.

Black athletes had already considered boycotting the Games because of their unequal treatment on the U.S. Olympic team. Tommie Smith, who would participate in the Mexico City protest, told reporters:  "It is very discouraging to be in a team with white athletes. On the track you are Tommie Smith, the fastest man in the world, but once you are in the dressing rooms you are nothing more than a dirty Negro."

Into this stepped two of the fastest men in the world: Tommie Smith and John Carlos. In the 200, Smith, the holder of 7 world records, finished first. Norman, the Australian, finished second, and Carlos won the Bronze. The two Americans had intended to make a statement at the podium, but Smith discovered that he had forgotten his gloves. It was Norman who suggested that Carlos wear Smith's left glove, so that when the two men raised their hands in the "Black Power" salute while the American anthem played, each wore one glove. In addition, they appeared on the podium shoeless, but wearing black socks, to represent black poverty. Smith wore a black scarf around his neck to represent black pride. All three athletes wore badges for the Olympic Project for Human Rights.

The International Olympic Committee's reaction was immediate and harsh. It told the U.S. Olympic Committee that if Smith and Carlos were not expelled from the Olympic Village, the entire American track and field team would be disqualified from further participation in the games. The USOC capitulated.

Tommie Smith predicted the treatment he would receive at home in a press conference:  "If I win I am an American, not a black American. But if I did something bad then they would say 'a Negro'. We are black and we are proud of being black."

Not surprisingly, the people who are losing their minds over Kaepernick's sit-down protest have used the "n" word all over Twitter, as if to prove to Kaepernick that he is allowed to be an American when he is winning games for the 49ers, but when he says something political about the state of the United States, then, it doesn't matter how gifted or wealthy he is, he can only be defined by his skin color.

"Within hours, the IOC planted a rumor that Smith and Carlos had been stripped of their medals (although this was not in fact true) and expelled from the Olympic Village. Brundage wanted to send a message to every athlete that there would be punishment for any political demonstrations on the field of play. But Brundage was not alone in his furious reaction. The Los Angeles Times accused Smith and Carlos of a “Nazi-like salute.” Time had a distorted version of the Olympic logo on its cover but instead of the motto “Faster, Higher, Stronger,” it blared “Angrier, Nastier, Uglier.” The Chicago Tribune called the act “an embarrassment visited upon the country,” an “act contemptuous of the United States,” and “an insult to their countrymen.” Smith and Carlos were “renegades” who would come home to be “greeted as heroes by fellow extremists,” lamented the paper. But the coup de grâce was by a young reporter for the Chicago American named Brent Musburger who called them “a pair of black-skinned storm troopers.”

If there is any comfort for Kaepernick to take from all of this, it is that Smith and Carlos did receive support from other athletes. They recognized the courage that Carlos and Smith's actions had taken, and they supported Smith and Carlos as the storm raged in the American media and among the American public. Already, some athletes have stepped forward to support Colin Kaepernick. One remarkable essay has shown that the Star Spangled Banner is a racist anthem that celebrates the killing of slaves.  Journalists are beginning to write columns in which they point to the bravery behind a decision to do something so spectacularly unpopular in order to do what someone thinks is the right thing to do -- one of those principles that Americans tell each other they admire.

We say that we admire individuals, and the hero who follows his conscience rather than follows the crowd. Perhaps at some point, we'll actually start celebrating the brave men and women who stand -- or sit -- for what they believe in.