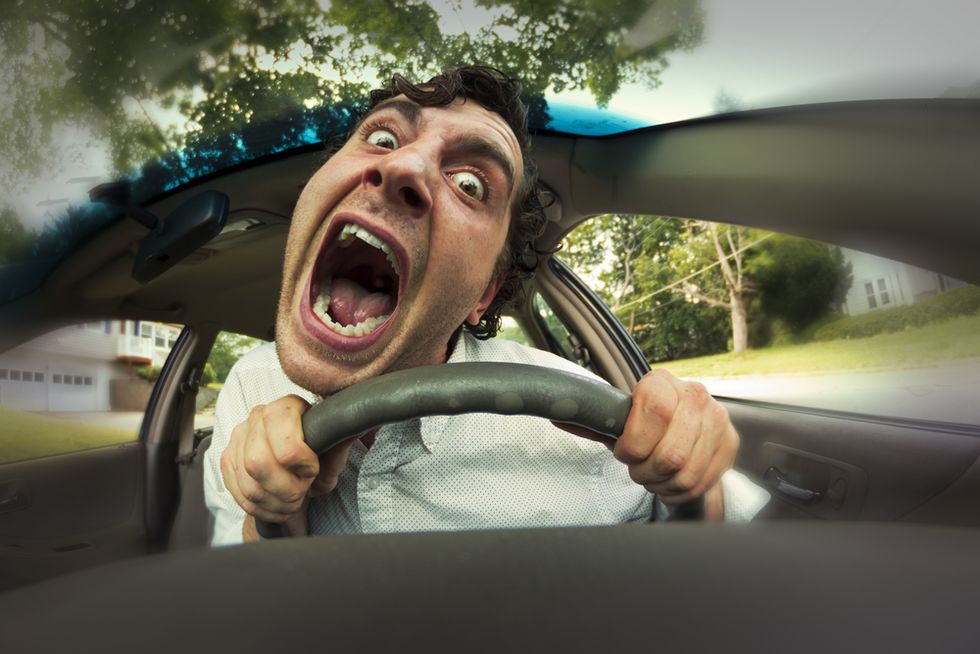 A road raging British motorist was caught on camera attacking another man's vehicle, trying to wrench the door open and then raining blows on the window and roof.

According to the Manchester Evening News, Mark Evans of Stockport was driving his Kia Ceed when another vehicle blew a turn and almost plowed into him.

Evans "instinctively" blew his horn at the other driver, which apparently enraged him. The other car, a Vauxhall Insignia, began to creep down the road ahead of Evans and his 17-year-old passenger -- an apprentice with the insurance company that employs Evans.

At one point, the other car stopped in the middle of the road, blocking the way, and the two men inside got out and spat at Evans' car. One of them was holding a half-empty bottle of whiskey.

Then, as Evans and his passenger idled at a traffic light, the Insignia's driver came running across the intersection and tried to open the car's driver side door. Unable to open the locked door, he tried to break the window with his fist, then punched the car again and again.

“Thankfully my car automatically locks as soon as you put the key in the ignition and move off," Evans told the Evening News. “I used to find it quite annoying but I was really lucky the car has that feature.”

“I couldn’t hear what he was shouting -- I just remember thinking ‘traffic lights, please change now’. I didn’t want him getting in the car," Evans recounted. “He had this mad look in his eye and he was so aggressive which was quite intimidating, especially as I knew there was at least one other guy with a half empty bottle of drink who could have joined in."

Eventually, the attacker left them alone. Evans said he has yet to report the incident to the police.