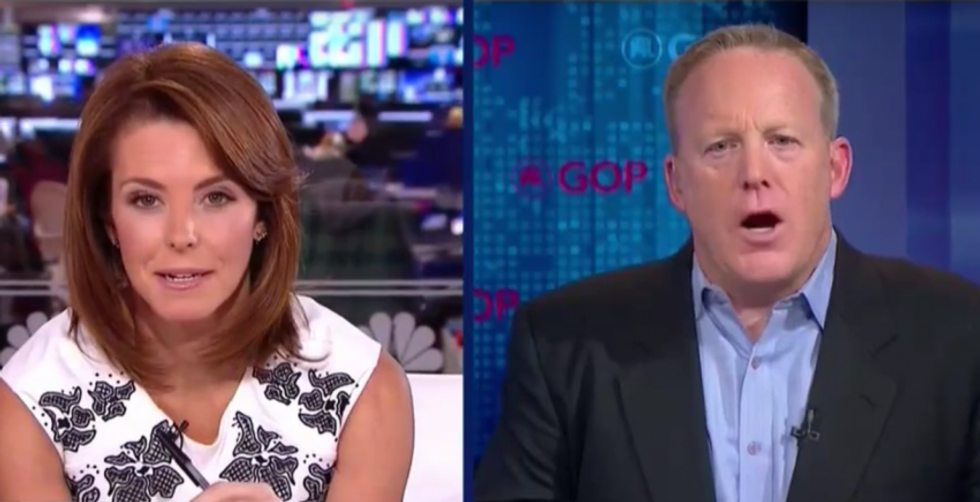 RNC Communications Director Sean Spicer just had a train wreck of an interview with MSNBC in which he tried to defend Donald Trump from charges of racism -- and failed spectacularly.

1.) Spicer says Hillary Clinton's speech on Trump's racism Thursday was a sign of desperation -- but he can't refute a single point in it.

Instead of answering the question, Spicer said that "I think the video they put out yesterday was unbelievably over-the-top, I haven't seen anything like that in 30 years in politics." He then started talking about the Clinton Foundation.

Ruhle then asked Spicer to explain why Clinton's attacks on Trump's past racist statements are a sign of "desperation" when Trump himself has spent the week calling her a "bigot."

Spicer once again tries to change the conversation to being about the Clinton Foundation, but Ruhle won't let him off the hook.

"He called Hillary Clinton a bigot," she said. "With all the things he could go after her for, do you agree with that? He called her a bigot."

Later in the interview, Ruhle again asked Spicer to defend Trump calling Clinton a bigot and he finally conceded that "that is not something I would personally say."

3.) Spicer has no explanation for why no prominent Republicans have rushed to defend Trump against accusations of racism.

"We haven't seen prominent Republicans stand up and defend him," she said. "Why do you think that is?"

"I don’t know," Spicer confessed. "I think Congress is in recess, it's August. There's a lot of reasons."

Spicer then pointed out that there were some people on Twitter who bravely defended Trump against charges of bigotry on Thursday.

Check out the entire interview below.