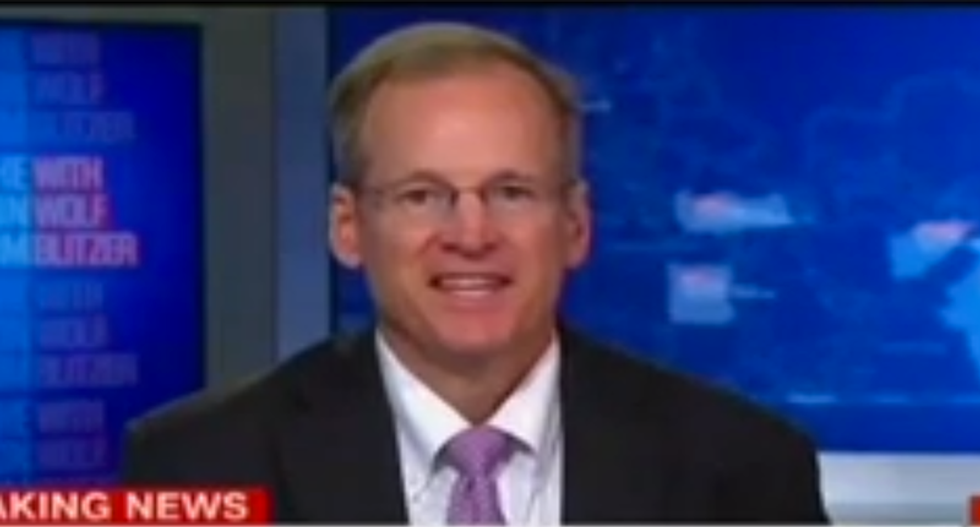 Donald Trump surrogate former Rep. Jack Kingston (R-GA) had some trouble explaining away his candidate's latest statements about African Americans while speaking to a Michigan rally.

Trump told a predominantly white rally crowd in a 93 percent white town that black Americans have been decimated by Democrats and he'll win 95 percent of their vote. Trump is currently polling lowest among African-American voters. The internet quickly erupted with outrage and mockery.

"He's polling right now at 2 percent with African-American voters," CNN host Brianna Keilar said. "Is that the right way to attract a voting block that obviously favors Hillary Clinton much more than him?"

Kingston maintained that the campaign's internal polls show Trump doing better than two percent. "But the reality is he's going there and he's taking it to them. He's giving them a proposal. He's saying, 'You know what? I'm interested, I went to Milwaukee, I'm here tonight, I want to talk to you,'" he said. At his speech in the Milwaukee suburbs, Trump slammed the black protesters in Milwaukee protesting in the streets.

Keilar jumped in, "I have to stop you because you said he's going there. He's not, he's in Diamondale, which is 93 percent white. When he was in Milwaukee the other day, it was part of Milwaukee that wasn't dealing -- I mean he, it's almost completely white"

"Well yeah, but Brianna he went," Kingston began to say over her. "I mean, maybe it would have been nice if he went and had a backdrop with a burning car, but the reality is—"

"Well, he met with David Clarke," Kingston said of the notoriously anti-black lives matter sheriff. "Who as you know is the African-American Sheriff of Milwaukee, and he's engaged with him. And his rallies are open to the public. Last night in North Carolina, we saw a lot of African-Americans. I wasn't sure about the crowd content tonight, but the reality is—"

Check out the full video via Media Matters: