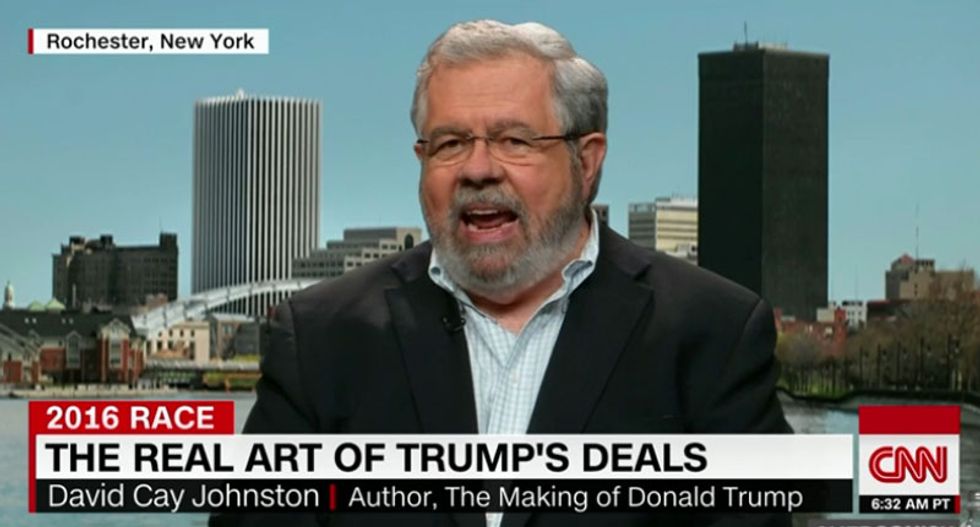 Donald Trump biographer David Cay Johnston Saturday on CNN said that the Republican presidential candidate once protected a convicted felon who was charged with cocaine trafficking.

"Donald got his personal helicopter and the one for his casinos from a convicted felon who turned out to be a major drug trafficker, and instead of cutting ties with this guy, he kept him on, he rented him an apartment under very unusual circumstances as I described in the book," Johnston told CNN host Michael Smerconish. "He wrote a letter pleading for mercy for him, saying he was a standup guy. The guy got 18 months while the people who actually delivered the drugs for him got 20 years. And, by the way, the case came before at one point Judge Maryanne Trump Barry -- Donald's older sister."

Johnston was referring to Joseph Weichselbaum, who was indicted for drug trafficking in 1985.

Johnston said the media should investigate Hillary Clinton's private email server, but he complained that virtually no one had called attention to Trump's "lifelong business dealings with Russian mobsters, con artists, violent felons, swindlers, and this big time cocaine trafficker."

Trump supporter Betsy McCaughey was then given a chance to respond.

"Yes I would like to," she said, before dodging the accusations entirely. "Voters have a choice: One the one hand, racial demagoguery and class warfare from Hillary Clinton. One the other hand, real economic growth and higher take home pay offered by Donald Trump," McCaughey insisted. "Right now our economy is limping along at 1.2 percent growth. And the reason? Declining business investment."

"Three quarters of declining business investment," she continued. "Donald Trump's program to lower corporate tax rates and produce unfettered energy development and release the economy from the burdensome regulations imposed by Barack Obama will mean 4 percent growth and that means higher take home pay for Americans. That is the key here."

According to The Smoking Gun: "At the time Trump wrote his character reference letter, Weichselbaum, then in his mid-40s, was already a twice-convicted felon. In addition to his 1986 plea to federal cocaine distribution and income tax charges, Weichselbaum’s rap sheet included prior convictions for grand theft auto and the embezzlement of more than $130,000 from a Brooklyn manufacturing firm where he worked for a decade."