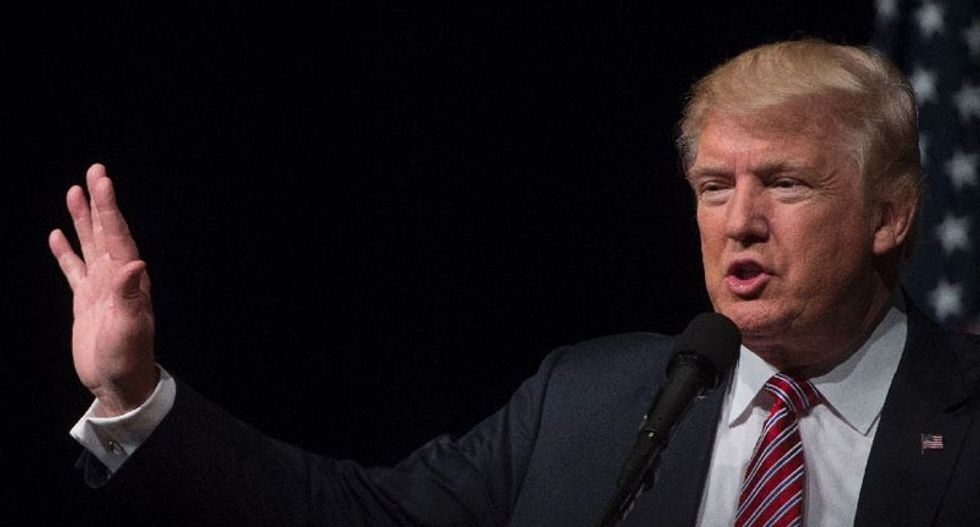 Trump, pictured on August 2, 2016, caused an uproar last December when he called for a temporary ban on all Muslims entering the United States (AFP Photo/Molly Riley)

August 9, 1974 saw the end of a major constitutional crisis with the resignation of Richard Nixon from the Presidency.

With Nixon facing impeachment, and at a time when he was showing signs of mentally unstable behavior, there were many Americans who realized that there was a potential danger of martial law and other dangers from a mentally deranged President under stress.

Thankfully, Richard Nixon had enough presence of mind to understand that any dictatorial actions on his part would be resisted by the Pentagon on orders of Chief of Staff Alexander Haig and that his reputation in history would be far worse in the process. So the nation emerged from this crisis in the best possible way, with a new President, Gerald Ford.

Now, however, and ironically on the 42nd anniversary of that historic moment in American history, we have a new constitutional crisis that is arising, and in many ways, reaching its peak. Donald Trump, who has been reckless in his behavior, has now used language encouraging Second Amendment supporters to do what they can to insure that Hillary Clinton does not become President and appoint Supreme Court Justices who might limit the right to bear arms.  His language at a campaign rally in North Carolina on August 9 implied that possible violence and assassination might be utilized.

This statement of Trump is beyond the pale, a sign of the further abuse of language and rhetoric by the Republican Presidential nominee.  It has led to Connecticut Senator Chris Murphy calling for his arrest and prosecution. Massachusetts Senator Elizabeth Warren asserted that Trump is using such language out of fear that he is losing to “a girl.”  Former Central Intelligence Agency head Michael Hayden stated that if any regular citizen of the United States had said in public discourse what Trump stated, it would have led to a Secret Service investigation and the pursuit of legal remedies, meaning arrest and prosecution.

This situation has never occurred before in American history, that one party’s candidate is so unhinged and dangerous in his rhetoric, that he is effectively calling for the assassination of opponent Hillary Clinton because of her desire to promote gun regulation in a nation that has seen rampant violence, most of it not terrorist based.

Trump has already said that he thinks the Presidential Election of 2016 will be “rigged,” implying that he might contest the results, not only if he were to lose in a narrow race, but even if the victory is massive. If he challenges the results there’s the very real possibility that rightwing groups might take to the streets in a violent manner.

Donald Trump has been someone that many have worried about as a potential Fascist demagogue, with his appeal to racism, nativism, xenophobia, misogyny, flag waving patriotism, and base emotions. He seems unable to avoid character assassination and innuendo against any and all critics.

As his candidacy divides the Republican party and the conservative movement we see the intelligence and defense communities warning of the dangers of a Trump presidency. Former defense officials fear Trump as Commander in Chief.  Others have said that Trump shows evidence of mental instability; some fear he’s in the early stages of dementia, making Trump unaware of reality, but with few around him willing to challenge him on anything he says or does, a very disconcerting situation.  It is more evidence of Trump’s belief in conspiracy theories, and it effectively incites unstable people among his followers.