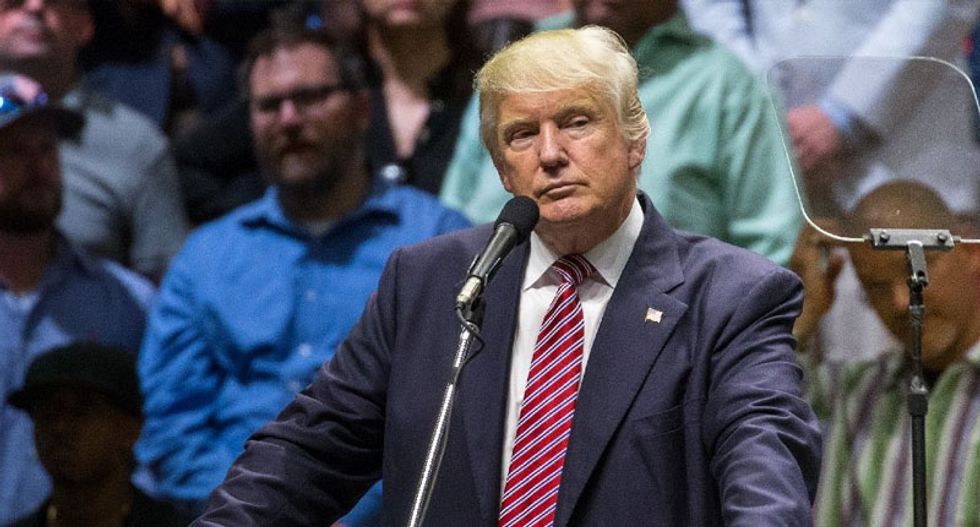 The tone of the US presidential campaign turned darker, with Hillary Clinton skewering Donald Trump as a man who flirts with racism and paranoid ideas, while he in turn labeled her a racist whose family foundation was a "criminal enterprise."

Speaking at a campaign event in Reno, Nevada, Clinton employed unusually tough language as she detailed a history of what she said were the Republican real estate mogul's discriminatory actions.

He had been sued as a young developer for failing to rent to black and Latino tenants, and by black employees of his casinos, the Democratic presidential candidate said.

The Republican nominee's recent choice of Steven Bannion, a firebrand conservative, as his new campaign chief showed Trump was embracing the extremist white nationalist stances of the so-called "alt-right" movement, she said.

"A man with a long history of racial discrimination who traffics in dark conspiracy theories drawn from the pages of supermarket tabloids and the far dark reaches of the internet should never run our government or command our military," Clinton said.

Her speech came on a day when one poll showed her support reaching an important threshold -- backing from just over half of all respondents. The survey by Quinnipiac University gave her a 51 to 41 percent lead over Trump in a head-to-head race.

Trump has recently attempted to enlarge his tiny base of support among blacks -- it has been as low as 1 percent -- arguing that African Americans have "nothing to lose" by voting for him.

He met with a group of black and Latino supporters at his Trump Towers in New York early on Thursday.

Speaking in New Hampshire later, Trump lashed out at Clinton, saying she was accusing "the decent Americans who support this campaign, your campaign, of being racists, which we're not."

Calling it "a tired, disgusting argument," he said it was Clinton who was being a "racist" by viewing minorities merely as a source of votes while doing nothing for them.

Trump doubled down later in an interview broadcast on CNN Thursday night, saying he personally thinks Clinton is "totally bigoted."

When asked to elaborate on the allegation, he said Clinton's policies "are bigoted because she knows they're not going to work."

- No path to legalization -

Trump also sought this week to moderate his earlier comments on immigration.

As president, he would focus on deporting the "bad" immigrants without uprooting the "good" ones, he said -- a sharp shift from his early insistence that all undocumented immigrants be deported.

"You can't take 11 million at one time and say boom, you're gone," Trump said on CNN.

But he repeated his pledge that there would be "no legalization" route for undocumented immigrants already in the United States, even those who have committed no crime.

"There's no legalization and there's no amnesty," he said. "If somebody wants to go the legalization route, what they'll do is go, leave the country, hopefully come back in, and then we can talk."

He also promised again that he would build a wall on the southern border.

"We will have a strong border and we'll have a tremendous wall, a wall that Mexico pays for," Trump told CNN.

Responding to Trump's immigration plan to step up deportation, the Clinton campaign said his extreme right-wing agenda "is fueling a dangerous movement of hatred across the country."

Giving in to the persistent urging of party leaders, Trump has begun relying more on a TelePrompter, allowing for fewer troublesome off-the-cuff remarks.

That new discipline has enabled the Republican tycoon to concentrate his attacks on Clinton and his allegations that, as secretary of state, she trafficked in influence through the family's Clinton Foundation.

Recently released emails showed that donors to the foundation had been given greater access to Clinton and her staff, he said.

"This week the curtain was truly lifted," he said." The corruption was revealed for all to see. The veil was pulled back on a vast criminal enterprise run out of the State Department by Hillary Clinton."

Clinton, who has denied the influence charges, pressed the argument that Trump lacks the temperament to be president.

"Donald Trump has built his campaign on prejudice and paranoia," she said. "He's taking hate groups mainstream and helping a radical fringe take over the Republican Party.

"His disregard for the values that make our country great is profoundly dangerous."