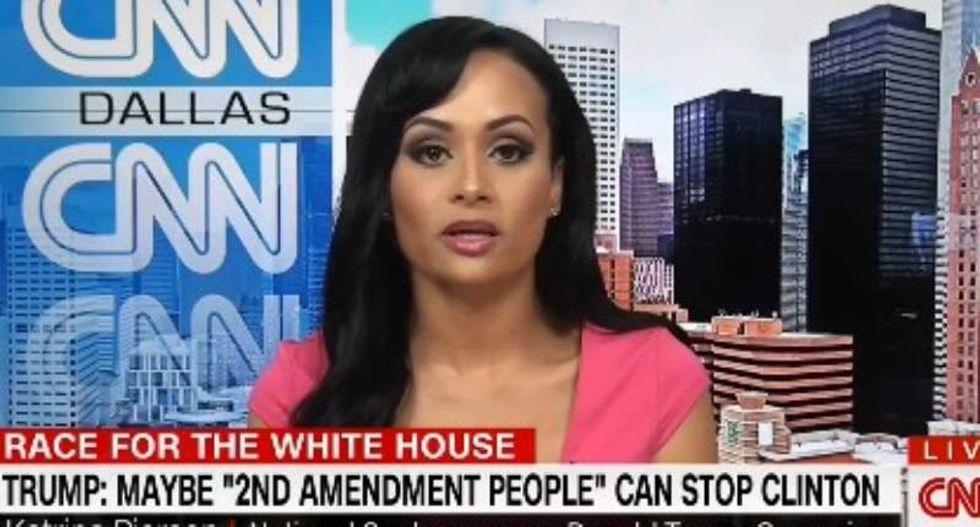 Just about the only person on Donald Trump's presidential campaign who can overshadow the boss and keep her job is  — the Texan and Trump spokeswoman who has made waves over a pair of embarrassing on-air flubs.

But the failed GOP congressional candidate-turned-Trump emissary, who hails from the Dallas suburbs, told The Texas Tribune that her batting average is just fine, and blamed technical snafus for statements that suggested she had little grasp of current events, let alone foreign policy.

“You could take ten years of history and try to make anyone look crazy,” she said.

In a CNN appearance over the weekend, Pierson wrongly stated that President Obama started the U.S. war in Afghanistan. President George W. Bush led the initial invasion into Afghanistan in 2001, just weeks after the September 11 attacks, in a bid to capture the plot's mastermind, Osama bin Laden.

“I obviously meant to say Syria and not Afghanistan,” Pierson told the Tribune, adding that while the U.S. never launched a full-scale war in Syria, she was referring to efforts to back Syrian rebels fighting against President Bashar al-Assad.

She blamed the error on a technical glitch — she could hear her voice echoing in her earpiece throughout the segment — and said it was so distracting that she jumbled her thoughts.

She gave a similar explanation for another recent flub: Earlier this month, Pierson charged that Obama and former Secretary of State Hillary Clinton were responsible for the death of Capt. Humayun Khan, whose parents have been outspoken critics of Trump. Khan died in 2004, long before Obama was in the White House.

That time, she said two of her thoughts ran together when she heard a producer in her earpiece telling her to wrap up ahead of a commercial.

Pierson contends that these mistakes were aberrations. She's done more than 600 interviews for Trump, she said, and misspoke "0.03" percent of the time. She said all public speakers screw up: Obama once referred to the “57 states” and Vice President Joe Biden once said "jobs" is a three-letter word.

But the criticism of her has been brutal and swift.

And they've resurfaced a Sept. 13, 2012 tweet where Pierson wondered if 9/11 was “an inside job.” Pierson told the Tribune she was referring to the Benghazi attacks, which took place two days before the tweet, on Sept. 11, 2012.

Those thinking Pierson's days on the trail are numbered better settle in.

“Katrina is a valuable member of our team,” Trump spokesman Jason Miller said on CNN Sunday. “We’re glad to have her onboard. She’s onboard pretty early with Mr. Trump. As you heard her say, there was some audio difficulties hearing that question.”

And one former cable booker said no matter what Pierson says, networks have an obligation to put her on air to ensure equal coverage of the presidential candidates.

"They can’t just put on Clinton people," said the former booker, who declined to be named in this article. "That’s who Trump is giving them and that’s who they are putting on."

Though the nation is just getting acquainted with her, Pierson has been a fixture in Texas Tea Party politics for several years. She was an early backer of U.S. Sen. Ted Cruz, and in 2014, ran for a U.S. House seat in Dallas. In the GOP primary, in which she raised a mere $230,000 in a costly media market, she was trounced by incumbent Rep. Pete Sessions.

Pierson said she's wholly focused on nothing but getting Trump elected, though she acknowledged there's talk about what she'll do after November. Might she run again?

“I have learned over the years to never say never,” she said.

By Abby Livingston, The Texas Tribune