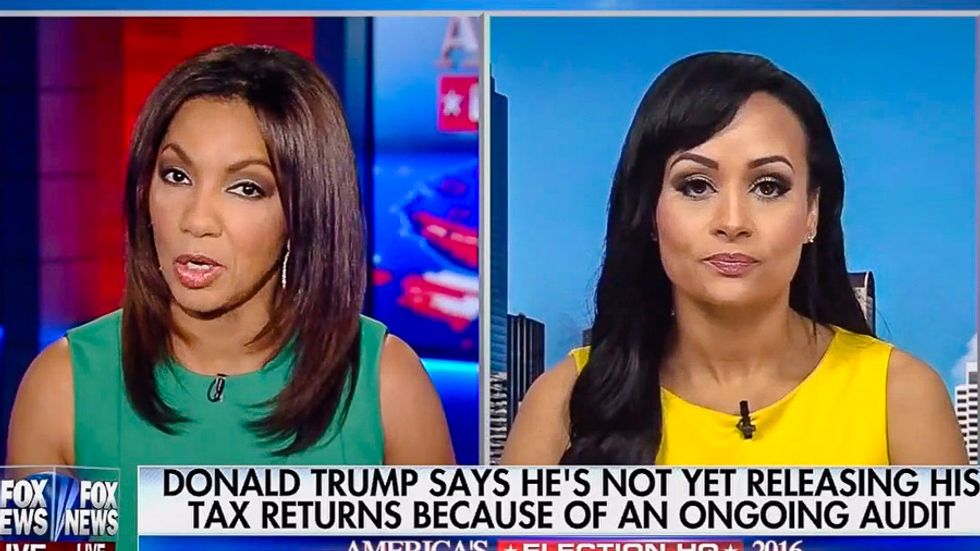 After incorrectly asserting during a CNN appearance on Saturday that President Barack Obama had invaded Afghanistan, Pierson showed up Sunday on Fox News to defend Donald Trump's decision not to release his tax returns.

But instead of Trump-friendly Fox personalities -- like Sean Hannity, Bill O'Reilly and Eric Bolling -- Pierson found herself being interviewed by weekend host Arthel Neville.

"As you know, Katrina, presidential candidates have consistently released their tax returns since the 70s," Neville explained. "And you also know there is no existing law barring people from releasing their tax returns during an audit."

"So the question is that everyone wants to know, why won't Mr. Trump release his tax returns?" the Fox News host wondered. "And can you answer the implications that he's hiding something?"

Pierson insisted that lawyers had advised Trump not to release his tax returns while he was being audited.

"This really has become much of a novelty in presidential campaigns," the Trump surrogate opined.

"What has become a novelty?" Neville interrupted.

"It's been going on since the 1970s," Neville pointed out. "It's a tradition, not a novelty. The voters want to know."

"It's a novelty tradition!" Pierson shot back.

"Here's the thing," the Fox News host continued. "The reason why the voters like Mr. Trump is because he is a successful businessman. They think that he can do the same for the business of this country: Create jobs, get the economy back on track. So, that is why they want to see his tax returns. Why won't he show them? Put the proof in the pudding."

Pierson suggested that the media was trying to "bully" Trump into showing his tax returns.

"It's not about the media," Neville said. "This is a tradition, Katrina. Why is it the media?"

"It is a novelty tradition," Pierson repeated. "Long-term career politicians like Hillary Clinton, they do things outside the standard. They develop charities, call them foundations. And they do all their dirty work within those boundaries, which is exactly why the FBI wants to investigate the [Clinton Foundation] today."

"And, Katrina, we're going to keep going on this because people want to know," Neville pressed. "It's not about a gotcha with Mr. Trump. Again, he is a successful businessman that he been touting to us this entire campaign. That is why they want to see."

The Fox News host continued: "Why are you saying that it's some sort of corruption or some sort of campaign that people are -- including the media -- are out to get him? That is not the case. He's running for the president of the United States of America. Show your tax returns. It's that simple."

"It is also not a requirement for a presidential candidate to release his tax returns," Trump's spokesperson replied. "So we can go back and forth on that all day."

"Really, it's about the Trump supporters," Neville observed. "They want to see it. Isn't it fair for Mr. Trump to go ahead and show the people who have been out there backing him?"

"I haven't seen any Trump supporter [asking for his tax returns]," Pierson blurted.

"Excuse me," Neville remarked, putting her foot down. "Everybody wants to see his tax returns, including the people who are voting for him."

"I have not seen that," Pierson said.

"Yeah, okay," Neville retorted. "As you know, when you submit any tax information, you are legally bound to provide factual information. So, there's nothing, in fact, if we see those tax returns that anyone can pick them apart unless there's something there that is something to hide, that maybe he's not paying the tax rate that someone of his income value is doing."

"You have the luxury of working at Fox and not CNN," Pierson jeered.

At that point, Neville concluded the interview and offered Pierson an invitation to return that was dripping with sarcasm.

"Katrina, I'd love to have you back after Mr. Trump unveils his tax returns and we can go through it line by line," she said. "That sounds great."