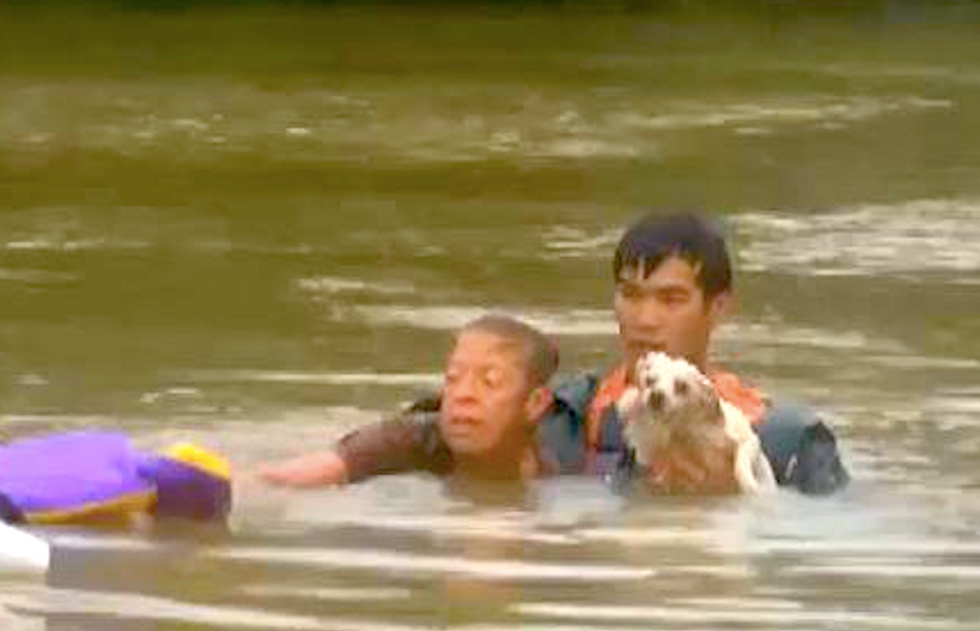 On Saturday, as the U.S Gulf Coast got pounded by unprecedented rain and flooding, a group of rescuers pulled a woman and her dog from her car just as it slipped under the floodwaters and sank.

CBS affiliate WAFB Channel 9 reported that three Baton Rouge men in a boat came upon the sinking red convertible car just as it was about to completely submerge.

"Get out!" one of the men called to the woman inside.

"Oh, my god, I'm drowning!" she cried as the rescuers tried to break the window, then slash open the vinyl top.

One of the men jumped into the water, tore open the roof and was able to haul the woman to safety just as the car disappeared beneath the murky brown water.

"My dog," she said as the rescuers on the boat threw a life vest into the water. "Get my dog."

The man who jumped in the water tried to find the dog below the surface, but couldn't.

"Dude, she's gone," says one of the men still in the boat.

However, the rescuer in the water dove under the surface, then reappeared with wet, wriggling white dog in his arms, saying, "I got your dog!"

BuzzFeed reported that more than 1,000 people have been rescued from flooding cars and buildings as the Gulf Coast gets drenched by the worst flooding in recorded history. At least three people have died.

Watch the dramatic video, embedded below: