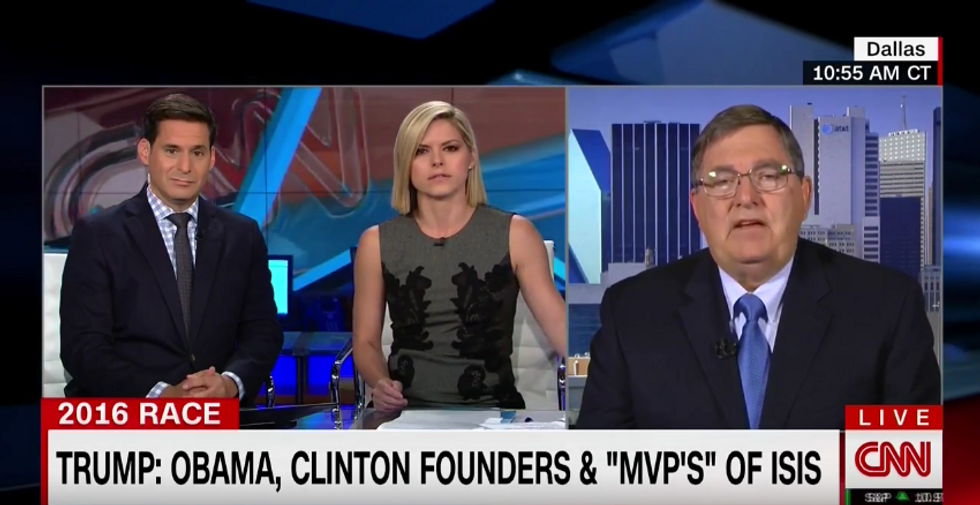 Donald Trump was given an opportunity to clean up his assertion that President Obama is the "founder of ISIS" on Thursday... and he declined.

Right-wing radio host Hugh Hewitt asked Trump on Thursday if he meant that Obama founded ISIS metaphorically -- that is, because he pulled out of Iraq, it created a power vacuum that was filled by ISIS.

"No, I meant he’s the founder of ISIS," was Trump's reply.

CNN subsequently had Trump surrogate Michael Burgess on to talk about Trump's remarks, and the Texas Republican congressman tried to argue that Trump was really talking about the power vacuum that was created when U.S. troops withdrew from Iraq.

But then co-host Kate Bolduan read out the full quote to Burgess and he had no idea how to respond.

"This is exactly what was asked," Bolduan began. "Hugh Hewitt said, 'I know what you meant, you meant he created the vacuum, he lost the peace.' Donald Trump says, 'No, I meant he's the founder of ISIS. I do.'"

For a painful five seconds, Burgess sat in total silence before coming up with a reply.

"Again, I think it's a distinction, a difference looking for a distinction," he said. "But the cauldron was, was set, the, the, the dials were all twisted in the proper direction to allow this to happen... I'm no expert in Middle Eastern affairs."

"Well, look, I, I," Burgess began before pausing for another three seconds. "As far as the battle of ISIS is concerned, the Congress actually needs to take the next steps, and that would be an authorization of military force."

Put another way, Burgess has no idea what Trump's plan to beat ISIS is.