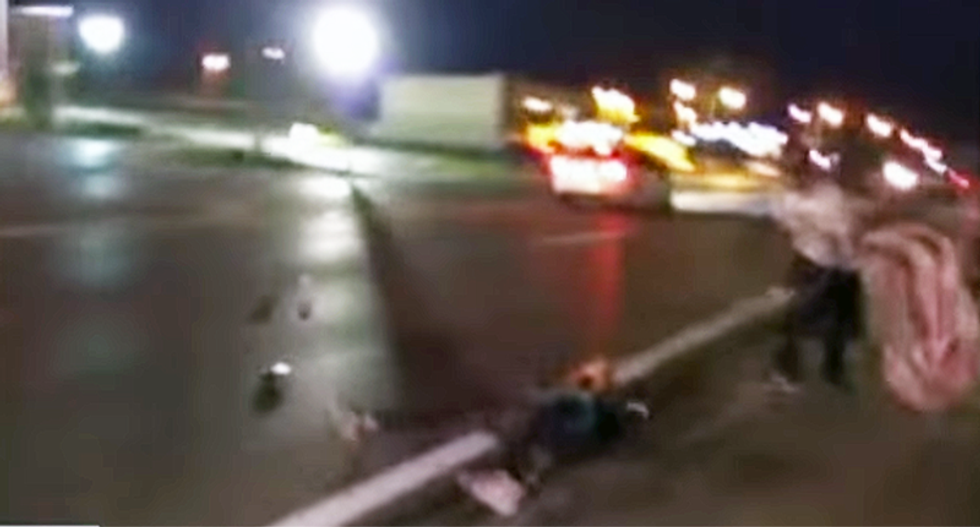 A terrifying and graphic video of a Black Lives Matter protester being hit with a car as he protested in Ferguson Tuesday night has emerged.

While the driver told police he or she did not hit the protester intentionally, the Associated Press is also reporting gunfire broke out after the incident.

The video shows protesters standing on the side of the road to commemorate the second anniversary of the shooting of Michael Brown by police officer Darren Wilson. Just seconds before the accident, fellow protesters could be heard screaming as they saw the car barreling toward the man. A large thump can be heard as the car strikes him and the video shows him lying on the ground, having been thrown from the car.

People can be heard screaming and the crowd quickly gathers around him and there are shouts for someone to call an ambulance. They slowly help the man to his feet when gunshots begin firing and the crowd scatters screaming.

"A protester just got run over and we just got shot at," said Heather de Main, who was shooting the video. After checking to make sure no one was hit by the gunfire she shouts, "Oh my God, those cops are just sitting over there!"

Police say that the driver is cooperating with police.

Watch the video below, but be aware it is graphic: