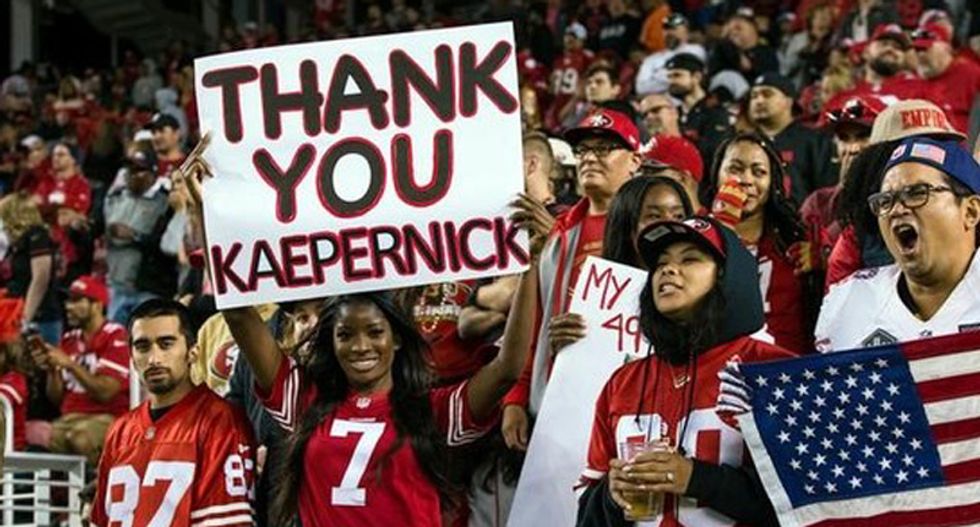 San Francisco 49ers backup quarterback Colin Kaepernick brought his protest against racial inequality to a nationally televised Monday Night Football audience, kneeling on the field rather than standing as the national anthem played.

Other players joined the African-American athlete who has ignited a furor within the National Football League through an act of defiance he introduced during pre-season games.

49ers safety Eric Reid knelt beside Kaepernick on the sidelines on Monday. Two other teammates, safety Antoine Bethea and linebacker Eli Harold, stood with fists raised during the performance of the "Star Spangled Banner".

"You have a badge, yes. You are supposed to be protecting us, not murdering us and that is what the issue really is," Kaepernick said of police after the game, referring to a series of shootings of unarmed black people by white officers that have prompted demonstrations across the country.

Two players on the opposing team, wide receiver Kenny Britt and defensive end Robert Quinn of the Los Angeles Rams, also raised their fists for the opening ceremony - recalling the salute by black athletes Tommie Smith and John Carlos during their medal ceremony at the 1968 Olympic Games in Mexico City.

The protest has angered some fans, who see it as disrespectful to the U.S. flag, the military and the nation.

While military personnel unfurled a giant American flag over the field, a number of fans shouted at Kaepernick, "Why don't you stand up?" according to an ESPN commentator reporting for the Disney-owned sports channel's broadcast.

But the protesting players have been seen as allies of the Black Lives Matter movement, which grew in response to the police shootings. About two-thirds of NFL players are black.

"One injustice against one American ... is an injustice against all Americans. We should all get behind that," said Daryl Graves, 52, a fan who was in the stands during the game in San Francisco. "Change doesn't happen without confrontation."

President Barack Obama has weighed in, saying Kaepernick was exercising a constitutional right and provoking conversation "around some topics that need to be talked about."

Olympics protester Carlos, now 71, praised Kaepernick, Peters and other NFL players in a Reuters interview on Monday for using their televised platforms as professional athletes to give Americans a "shock treatment."

Other members of the Chiefs linked arms during Sunday's anthem, as did the Seattle Seahawks at their home game against the Miami Dolphins. The exact meaning of their gestures was not clear.