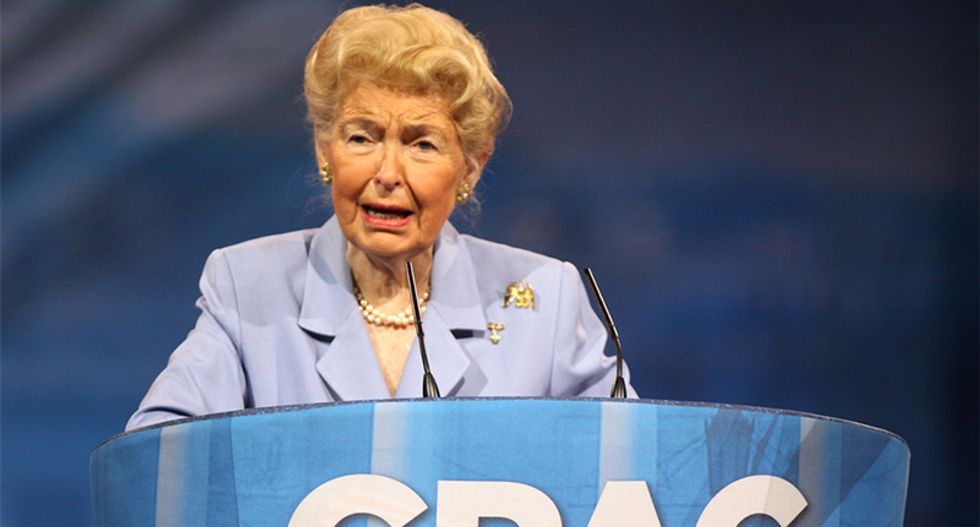 It was announced Sunday that longtime anti-feminist Phyllis Schlafly has died at her home in St. Louis at 92.

Blaming the Violence Against Women Act for broken marriages:

“When marriages are broken by false allegations of domestic violence, U.S. taxpayers fork up an estimated $20 billion a year to support the resulting single-parent, welfare-dependent families.” - Schlafly, Feb. 2011.

"And the first commandment of feminism is: I am woman; thou shalt not tolerate strange gods who assert that women have capabilities or often choose roles that are different from men's." - Schlafly, "Feminists On The Warpath Get Their Man, Feb. 2005.

“Non-criminal sexual harassment on the job is not a problem for the virtuous woman except in the rarest of cases.” -Schlafly before the United States Senate, 1981.

Men are victims in higher ed:

"It's really dangerous for a guy to go to college these days. He's better off if he doesn't talk to any women when he gets there. The feminists are perfectly glad to make false accusations and then claim all men are capable of some dastardly deed like rape." - Schlafly, "Hatred of Men Gave Rise to UVA Rape Story," Dec. 2014.

“By getting married, the woman has consented to sex, and I don’t think you can call it rape.” - "Schlafly cranks up agitation at Bates" Sun Journal, 2007.

"Men should stop treating feminists like ladies, and instead treat them like the men they say they want to be." - Schlafly, "Feminists On The Warpath Get Their Man." Feb. 2005.

Women in the military:

"Every country that has experimented with women in actual combat has abandoned the idea, and the notion that Israel uses women in combat is a feminist myth." - Schlafly, "Women Don't Belong In Ground Combat," June, 2005.

The War on Men:

"There is a war on men, and [feminists] are very open about it. They don't conceal it; they brag about it. You read all of their material – they're always saying they want to abolish the patriarchy. They said that husbands are not necessary in a marriage, they're not necessary in raising children." - Schlafly, "Hatred of Men Gave Rise to UVA Rape Story," Dec. 2014.

"The atomic bomb is a marvelous gift that was given to our country by a wise God." - Schlafly, "Women are the Best Warmakers". The Day, 1982.

"Minors are an intended audience for the highly profitable sex industry. Impressionable teenagers are easily persuaded to have abortions, and homosexual clubs in high school are designed for the young." - Schlafly, "Activist Judges Rule for Special Interests," Sept. 2004.

"It is long overdue for parents to realize they have the right and duty to protect our children against the intolerant evolutionists." -Schlafly, "Time to End the Censorship," Dec. 2004.

"Many professors are Marxists or other varieties of radicals who hate America." - Schlafly, "Feminist Mischief on College Campuses," April 2005.