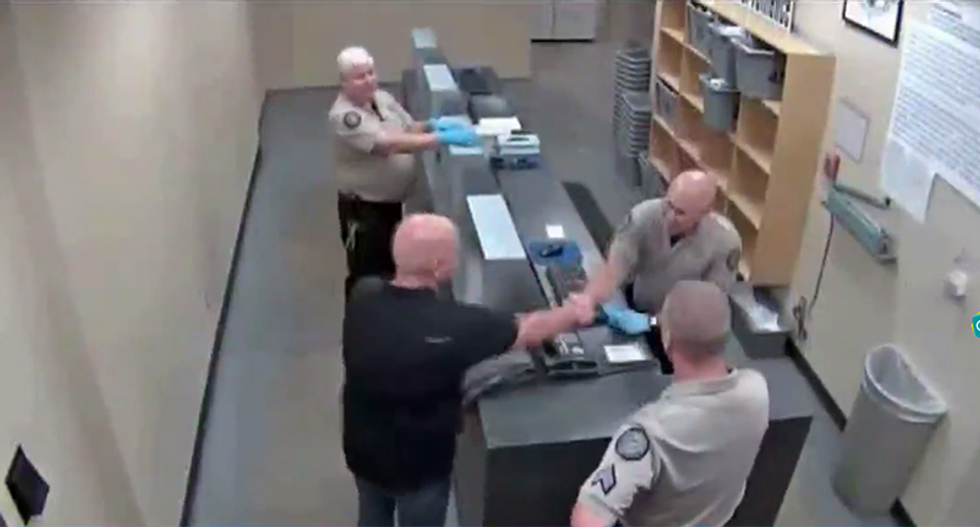 Former Mesa Police Lieutenant Rick Van Galder was pulled over in February and ultimately charged with a DUI (Driving Under the Influence). He pleaded guilty and was sentenced to serve three days in jail. On paper, it seems like he did, but cameras from the jail show a different story.

It first began when Van Galder was pulled over with twice the legal blood alcohol level. Police body camera videos show that he tried to use his 20 years as a police officer to get himself out of being arrested and held accountable. The police refused to let it slip. Van Galder then resigned his position before he could be fired and was sentenced.

Serving the time was a totally different story, however. The Scottsdale Police Department has suspended three of the top command staff at the city jail after an investigation by KPNX revealed that the arrangement for Van Galder was a pretty sweet deal.

Initially, it was decided Van Galder would spend his three days in an isolation cell because as a police officer it can be dangerous for him to be in with other inmates he could have put in jail. He wasn't even supposed to be in the Scottsdale jail. The jail is only allowed to hold inmates for 48 hours, but Van Galder was sentenced to 72 hours. Furthermore, what happened was Van Galder spent three days hanging out with the command staff, chatting them up and at one point they all went out to lunch. Probably not what the judge intended when he sentenced the former cop to sit behind bars.

Scottsdale Police Chief Alan Rodbell claimed he had no knowledge that this was going on and certainly didn't authorize his jail officials to give Van Galder any special treatment. His initial reaction was to deny that it could have taken place. He simply couldn't believe it was true.

"The impression we had when we agreed to this arrangement was that he was going to spend confinement for three days in our jail," said Rodbell.

That's not what happened at all.

Van Galder entered his cell after turning himself over at 5:45 p.m. Detention Sergeant Don Vogel woke him the next morning at 7:40 a.m. but then led him through a door that reads "No prisoners beyond this point."

"It's a very concerning video because it screams of all kinds of violations of policy and procedure," said Rodbell. "He was taken out of a secure area and taken into the detention managers office, which is outside the secure area."

They found that surveillance cameras in other areas of the jail, like outside Lieutenant Jeff Landrum weren't even working or weren't turned on. Interestingly enough, Van Galder spent the rest of his "time in jail" chilling in that office.

At one point Sergeant Kris Keilich brought him some fast food lunch that they sat together eating in the detention area.

"I think he paid for it himself and they went out and bought lunch and brought him back into the detention area and shared lunch with him," said Rodbell.

At one point his wife Teresa, who is a Mesa Police homicide detective, even came to visit him. She was led to the detention manager's office, where her husband was waiting out his time.

"His wife got into Lieutenant Landrum's office and even brought lunch on two occasions," said Rodbell.

Not surprisingly, no visitors are allowed in the jail. That didn't seem to matter to the Van Galder family.

"I think she should know better, absolutely," Rodbell said.

Presumably, to make things easier, Van Galder was simply given a key card by one of the jail employees so he could get wherever he needed to go without having to ask. He could have even left the jail if he wanted.

"Highly inappropriate, certainly not within our policies and practices and quite frankly, very disappointing," said Rodbell.

Because cameras weren't on or were broken, police department can't even verify where he was the entire three days he was "in jail." Specifically, the afternoon of Aug. 5 through Sunday, Aug. 7, they have no idea where he was, he could have left the jail, they don't know.

"This does erode or kind of shake up that confidence, question of confidence and that does not make me happy," he said.

Rodbell said that he thinks they felt another officer was coming to spend time, "and for whatever reason made decisions that weren't good decisions in terms of how he was going to be treated while he was here."

These officers who were in charge of the jail aren't new or untrained either. Sergeants Vogel and Keilich have both worked at the jail for more than 20 years and Detention Manager Jeff Landrum has been the head for that long as well. They have perfect personnel files and nothing like this has ever happened before.