Attorney defends Charlotte protests: I don't see the violence until cops run at us 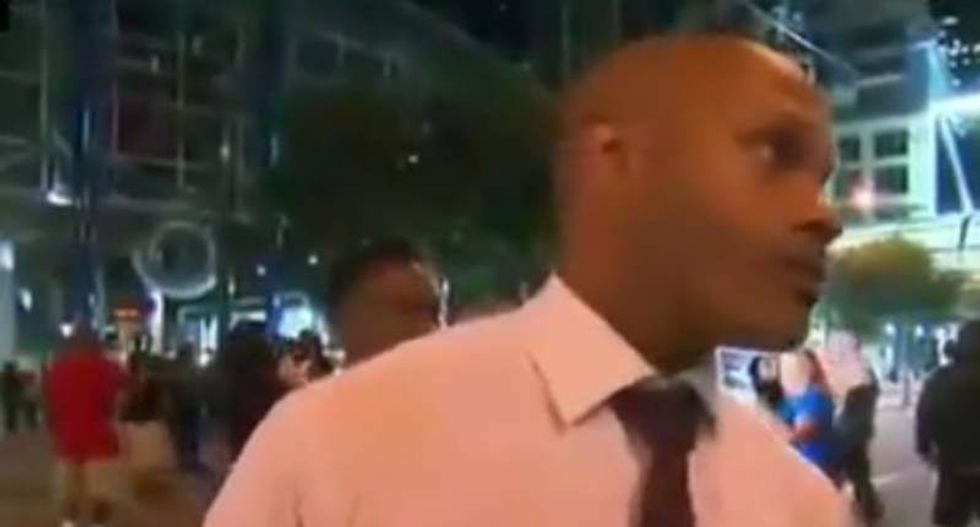 A Charlotte attorney seen on live TV on Wednesday standing between demonstrators and police did not accept CNN's premise that the protesters should be dismissed as violent.

"How does it feel seeing people get really violent?" reporter Boris Gomez asked Toussaint Romain. "What's your message to them when they kind of lose their composure and throw things at police?"

"The police getting violent or the people expressing themselves at police?" Romain asked in return. "'Cause if you were to take this camera and look all around, I don't see the violence, man. Until the police are running at us. And so they're throwing tear gas at you. And at me. 'Cause that's what happened earlier. Why'd you get tear-gassed? Why did I? But we responded in a way that was frustrated and upset, telling America: 'This is enough.' It doesn't mean I'm violent, man. It means I've had enough."

"I know you certainly haven't gotten violent," said Gomez, whose colleague Ed Lavandera was knocked to the ground earlier in the night. "But we've seen other people lose control. What's your message to them? How do you get them to keep composure?"

"Donald Trump is running for president of the United States. That doesn't make all the rest of America Donald Trump people," Romain replied. "We're here to make a stance. We're here to show that we’re not the same. And we're here to say enough is enough."

Romain, an assistant public defender for the Charlotte Mecklenburg Public Defender's Office, was visible during CNN's coverage of the protest standing between demonstrators and police. At one point he could be seen walking on the street in the tear gas deployed by officers.

"People are hurting, man. People are upset. People are frustrated," he told Gomez. "People need leaders. I'm not trying to be that leader, I'm trying to prevent people from being hurt."

He also refused to accept that a shooting earlier in the evening -- mistakenly reported as fatal -- symbolized the events of the night.