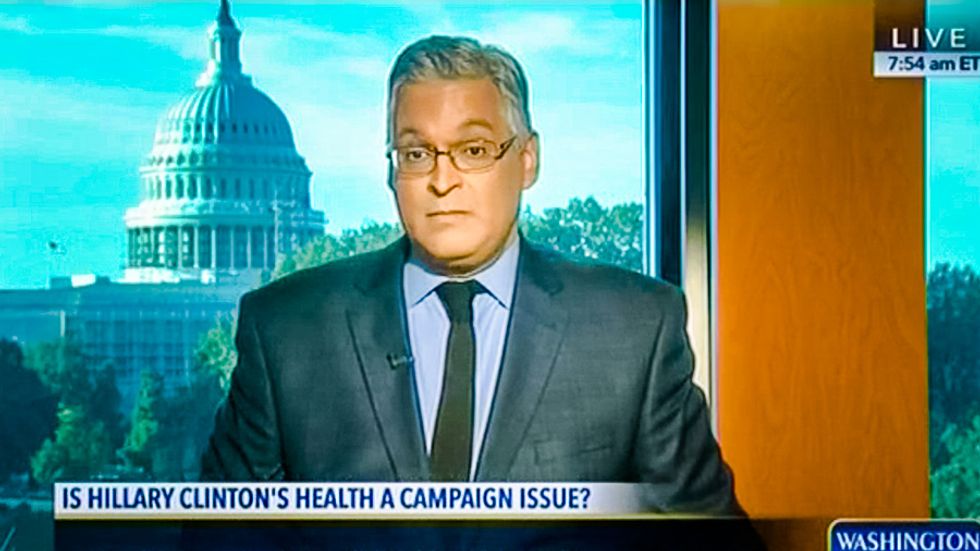 Following the news that Democratic presidential nominee Hillary Clinton have been diagnosed with pneumonia, C-SPAN callers on Monday presented a number of outlandish conspiracy theories about the candidate's health.

"Hillary is a lot more ill than she seems to be," a caller named Dee on C-SPAN's Republican line told host Pedro Echevarria. "I think she wants to win the presidency and I have a feeling she's not going to last too much longer."

"She wants to be in the history books, okay?" Dee continued. "She needs to make it to the presidency and once she does that, it really isn't going to matter with her. [Vice presidential nominee Tim Kaine] will end up being our president."

The Florida Republican also said that she was suspicious because a "silver thing" fell out of Clinton's pants during Sunday's Sept. 11th memorial.

Jeff from Indianapolis stated that Clinton's health problems were the result of a rare form of epilepsy that caused Petit Mal seizures.

"They've showed her handlers and people around her when she's had these spells pull out a little syringe that looks like diazepam," Jeff opined. "When she was on the podium that day she had a real bad coughing spells and it looked like she was going through one of these Petit Mal syndromes, she blanked out for a minute and a guy had to put his arm around her and remind her what the topic was."

Robert from Massachusetts called in on the Democrats line with a conspiracy theory about why Clinton wears pants.

"The reason why you see Hillary Clinton wearing pants all the time is because of the blood clots in her legs," Robert advised Echevarria. "So since she started wearing pants, that's the day she started getting sick."

Tim from Pennsylvania predicted that Clinton could die before the election and that officials would keep it a secret.

"I hope she's all right," Tim said, calling on the independent line. "I just think that should could probably pass away, God forbid, and we wouldn't hear about it until after the election."