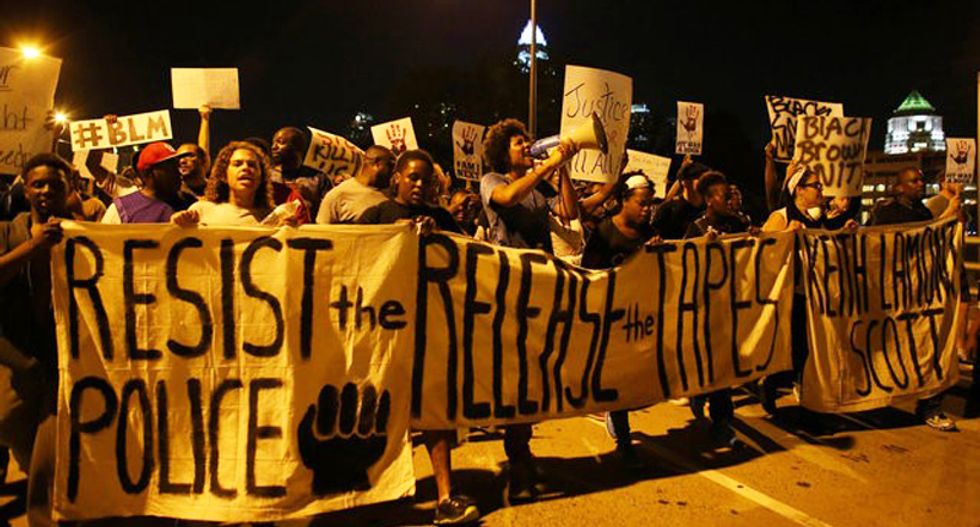 A fourth night of protests over the fatal shooting of a black man by police in Charlotte, North Carolina appeared to be ending peacefully early on Saturday morning as pressure grew on local police to release videos of the incident.

Several hundred protesters wound through the streets of Charlotte for hours on Friday night, led by demonstrators holding a banner calling on police to "release the tapes" of the fatal police shooting of a black man. There were no violent confrontations and police did not enforce a midnight curfew.

The family of Keith Scott, a 43-year-old father of seven, on Friday released a two-minute video recorded by Scott's wife, Rakeyia, including audio of her pleading with officers "Don't shoot him! He has no weapon" as they yell at Scott, "Drop the gun!"

Scott's death was the latest in a string of police killings of black men in America, which have unleashed protests and riots across the country and led to international criticism of the United States' treatment of minorities.

A United Nations working group on Friday compared the killings to the lynching of black people by white mobs in the 19th and 20th centuries and recommended the U.S. track police killings and end the practice of racial profiling.

Over the last two years, protesters have filled streets from Milwaukee to Minneapolis, from Ferguson, Missouri, to Baltimore. Protesters have also taken to the streets in Dallas and Baton Rouge, Louisiana, where police officers were shot and killed by gunmen who claimed to be avenging the deaths of black men unjustly slain by law enforcement.

The footage by Scott's wife captures the sound of four shots but does not show Scott being hit - nor does it make clear whether he had a weapon.

Charlotte police claim Scott was armed with a gun, which the family has denied.

The North Carolina State Bureau of Investigation, the state police leading the investigation, said that the Charlotte-Mecklenburg Police Department had the legal authority to release the video and that it understood discussions to do so were under way between local officials.

However, Charlotte-Mecklenburg Police Chief Kerr Putney told reporters on Friday that releasing the footage now could harm the investigation led by the state.

"I know the expectation is that video footage can be the panacea and I can tell you that is not the case," he said.

Putney said that he would eventually agree with the release of the video. "It's a matter of when and a matter of sequence."

Protesters in Charlotte gathered after nightfall in a small park and others chalked the names of police shooting victims from across the country on a street before starting a march through the city on Friday.

Demonstrators marched under the eye of armed National Guard troops, chanting "Resist the police" along with calls for videos of Tuesday's shooting of Scott.

At one point, the march passed the Charlotte Jail Central, where prisoners flicked lights off and on. "We see you, we love you," protesters chanted in response.

In the video, released by the Scott family to U.S. media outlets, Scott's wife can be heard shouting "Keith, Keith, don't do it," although it is not clear whether she is directing her comments to her husband or police.

Scott's wife in the video also tells police that her husband had a TBI, or traumatic brain injury, and had just taken "his medicine." It was not clear from the video whether police heard the wife.

The family had originally contended that Scott was carrying a book, not a gun, but after viewing the police video on Thursday, said it was "impossible to discern" what, if anything, Scott was carrying, an attorney representing the family said.

Charlotte Mayor Roberts on Friday called for the release of the videos as an act of transparency, although in an interview with CNN she said the footage did not clear up what happened. Roberts has seen two police videos as well as the family one.

"All three videos I've seen are inconclusive," she said on CNN.