Clinton ally scorches 'coward, wimp' Trump for his attack on black pastor: 'He mewed like a kitten' 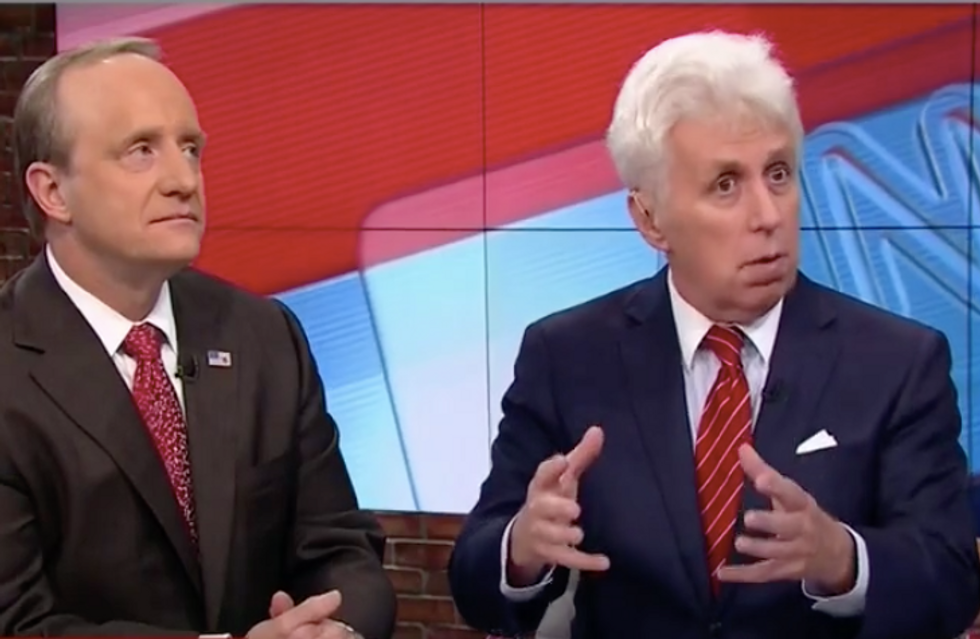 Donald Trump surrogate Jeffrey Lord appeared on CNN Thursday to defend his boss' run-in with a black pastor in Flint, MI. He may have gotten more than he bargained for when Paul Begala responded that Trump is a "bully," a "wimp" and a "coward" for his handling of the incident.

Trump traveled to Flint to address a black congregation about the ongoing water crisis there, where the state's Tea Party government knowing allowed the water supply to impoverished areas to be contaminated with lead.

Trump stood before the assembly and proceeded to deliver a campaign speech attacking Hillary Clinton until was interrupted by Pastor Green Faith Timmons, who reminded him that he hadn't been invited to her church to deliver a political speech. On Thursday, Trump bashed the pastor in an interview with Fox and Friends.

When asked if being called out for his rudeness to a black congregation bothered him, Trump said, "No, it doesn't bother me, no. I mean, everyone plays their games."

The anchors were incredulous, asking Lord, "'Plays their games?' He's taking on the pastor who interrupted him. Do you like that? Do you think that's what happened?"

"Well, you know, there's always a political implication to the speech," Lord responded. "Now -- I'm going to pick on Hillary Clinton here, news flash. Donald trump did not show up in this church and change his tone and his accent, 'I ain't in no ways tired' and condescend to people in the church."

Lord is referring to a church appearance Hillary Clinton made in Selma, AL when campaigning in 2007. Clinton was quoting the lyrics to the Rev. James Cleveland hymn, "I Don't Feel No Ways Tired", a civil rights anthem.

Lord went on, "He showed up and was giving a total predictable presidential candidate style speech. She went up and stopped him."

He then went on to accuse Timmons of planning to interrupt Trump in advance, saying, "I have this feeling strangely that she probably knew she was going to do this."

"This is really illuminating about Donald Trump's character. He went there, he made a political speech, he attacks his opponent in a house of God, that's a mistake, but it is a fairly common mistake," Begala said.

"So then the pastor, Rev. Green Faith Timmons, stops him. She is poised and strong, yes, but calm. She's not calling him names or criticizing him," he said. "And he backs off right away. He's like a frightened little boy because he's a bully and inside every bully is a coward. He mewed like a kitten, and when he's confronted by a strong woman, he backs down."

He concluded, "But then what does he do? When she's not there, then he attacks her later."