Clinton campaign admits it could have better handled health scare 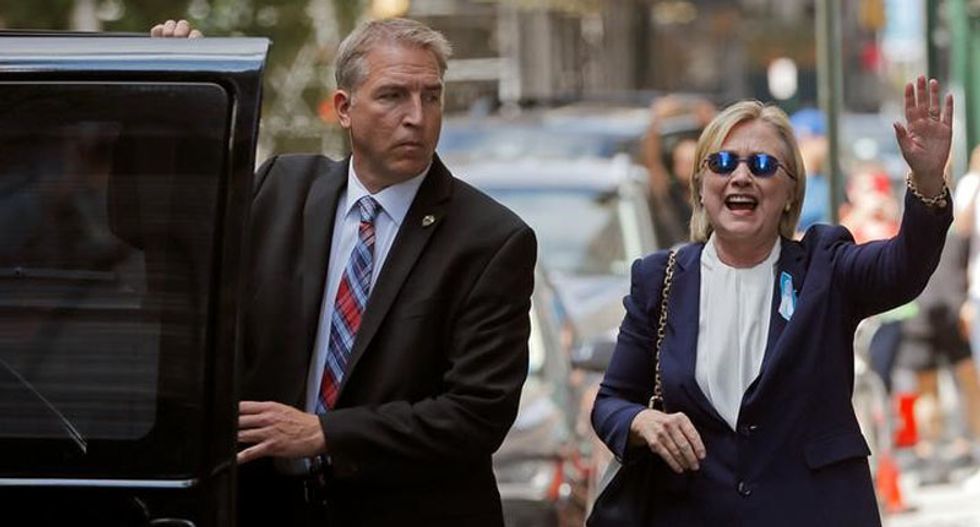 Hillary Clinton's presidential campaign acknowledged on Monday that it mishandled a health scare for the Democratic candidate and promised to release additional medical details in the coming days, a pledge Republican rival Donald Trump made as well.

Clinton, 68, canceled a trip to California to recuperate from pneumonia, but her campaign drew criticism for waiting two days to reveal that diagnosis, a move that reinforced concerns about what critics view as a tendency toward secrecy.

“I think that in retrospect, we could have handled it better in terms of providing more information more quickly," Clinton spokesman Brian Fallon told MSNBC.

He said the campaign was too focused on making sure Clinton was well instead of releasing information during the 90 minutes following the release of a video showing her nearly collapsing after attending a memorial in New York for the Sept. 11, 2001, attacks.

The campaign said initially that Clinton was suffering from the heat.

"In those 90 minutes, we were putting a priority on making sure she was OK,” Fallon said. Clinton received the diagnosis on Friday. Her campaign announced it on Sunday.

Trump, 70, has been suggesting for weeks that Clinton lacks the energy needed to be president. He has raised questions about her stamina, mirroring a strategy used during the Republican primary campaign when he derided rival Jeb Bush as a "low-energy" candidate.

Clinton flew nearly a million miles as secretary of state under President Barack Obama and has kept up a heavy travel schedule as a presidential candidate. Democrats said her continued attendance at events despite her diagnosis proved her toughness.

Asked by Fox News on Monday about the health of the candidates, Trump said: "I think it's an issue. In fact ... this last week I took a physical and .... when the numbers come in I'll be releasing very, very specific numbers."

Trump has released less information to the public about his health than Clinton has.

In recent weeks, staff at Clinton's headquarters in Brooklyn have been hit by an illness, and several aides required medical treatment, a campaign aide said.

Spokesman Fallon said Clinton never lost consciousness during the episode and it was not connected to a concussion she suffered in 2012.

“There’s no other undisclosed condition. The pneumonia is the extent of it," he said.

The health problem was the latest blow for Clinton at a time when Trump has erased most of her lead in national opinion polls and is competitive again in many battleground states where the election is likely to be decided.

Clinton's dismissal of half of Trump's supporters as a "basket of deplorables" of racist, homophobic people on Friday triggered heavy criticism, and she later said she regretted the comment.

Trump has compared the remark to a much-criticized comment by 2012 Republican presidential nominee Mitt Romney that 47 percent of the electorate were dependent on the government.

“I was deeply shocked and alarmed to hear my opponent attack, slander, smear, demean these wonderful, amazing people who are supporting our campaign by the millions,” Trump told a conference of National Guard members in Baltimore.

He did not mention Clinton's health, however.

Trump has made incendiary comments repeatedly as a candidate, including questioning whether a U.S.-born judge could be fair because of his Mexican heritage and criticizing the Muslim parents of a U.S. soldier who died in combat.