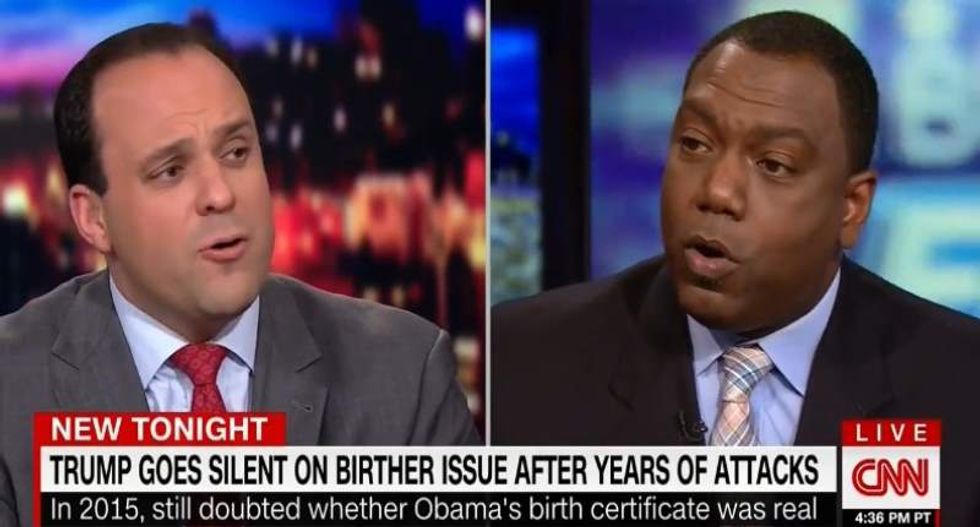 Boris Epshteyn, senior advisor to Donald Trump's presidential campaign, was called out for the second time in two days on Friday, this time during a panel discussion on CNN's Out Front.

"Your outreach to African-Americans did not include an apology for the 'birther' comment," fellow panelist Basil Smikle told Epshteyn. "It's an abject failure of this -- and indeed his campaign -- because this comment that [President Barack Obama] was not born here is a proxy for delegitimizing this man."

While Epshteyn was willing to say that he believed Obama was born in the US, he constantly ducked the question of why Trump would not do the same after years of questioning that.

"This is an issue that's been put to bed and it was resolved," he said. "Barack Obama was born in the United States and Donald Trump has moved on. He said so last week -- he said 'I'm not talking about this anymore.'"

"Not talking about it is not moving on," said Smikle, a political consultant who is supporting Clinton in this year's election.

Epshteyn was criticized a day after MSNBC host Craig Melvin shut their interview down early, saying there was "not enough time" for Melvin to refute all of Epshteyn's statements.