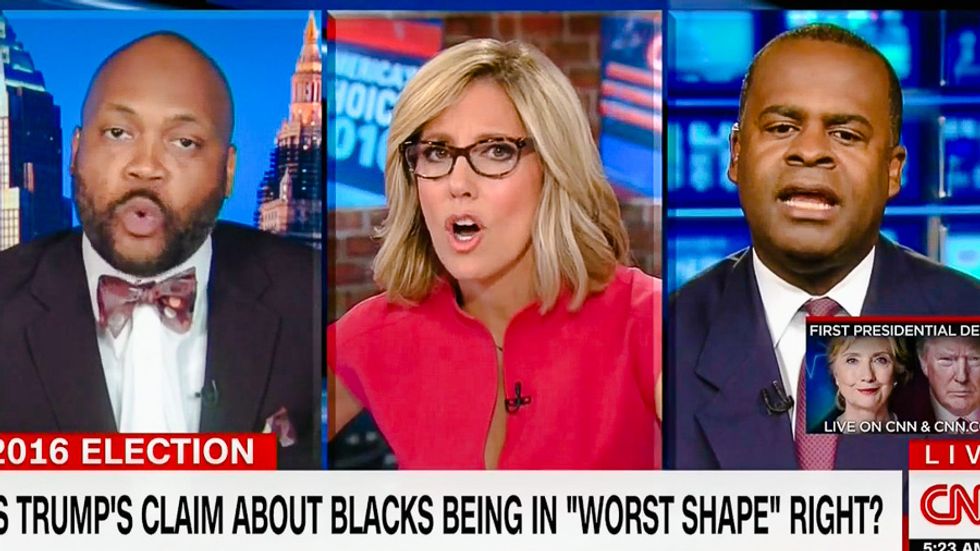 CNN host Alisyn Camerota abruptly ended an interview with Cleveland Pastor James Davis, a supporter of GOP nominee Donald Trump, after he continually shouted over other another guest and refused to accept any facts showing that the black community was not in worse shape than any time in U.S. history.

On CNN's New Day, Davis told Camerota that Trump was correct to assert that black people were worse off than "ever, ever, ever."

"We see that poverty is at an all-time high underneath this administration," he opined.

"The poverty rate has actually dropped," Camerota pointed out.

Davis disagreed, arguing incorrectly that poverty had only decreased for whites under President Barack Obama.

Atlanta Mayor Kasim Reed noted that the black unemployment rate had dropped from nearly 20 percent in 1985 to 8.1 percent in August of this year.

But Davis interrupted Reed and continued to do so throughout the remainder of the interview.

"You don't know what you're talking about!" Reed shot back.

Camerota tried to get the segment back on track by fact checking the black unemployment rate, but the response was a cacophony of disagreement.

"The pastor is doing what Donald Trump does: lies," Reed insisted.

"Are blacks experiencing the worst they've ever had?" Camerota asked Davis.

"That's a euphemism!" Davis shouted back. "It's the worst it's been under this administration with these liberals in office! 'Ever' is a euphemism!"

As Reed rattled off statistics to prove that things were not worse for the black community than "ever, ever, ever," Davis refused to let him be heard.

"Gentlemen, we can't hear you!" Camerota pleaded before finally giving up. "Alright, guys, thank you for both of your perspectives. Thank you for the debate."

Davis and Reed could be heard continuing to argue as CNN finally cut their audio feeds.

"Hopefully that's not what we're going to see four days from now when we have the first debate," co-host Chris Cuomo quipped.