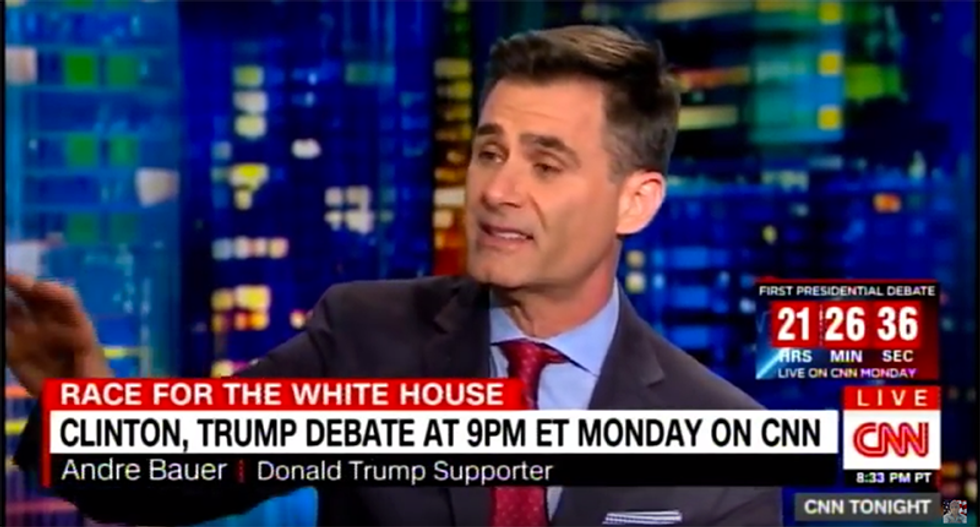 The panel began with Republican strategist Paris Dennard and Angela Rye going at it over whether Republican candidate Donald Trump doesn't deserve to be treated as Clinton's equal.

"Listen, at the end of the day Mr. Trump wants to be judged as her equal," Dennard began. "As someone who deserves to be on the stage, someone that is qualified to be on stage and someone who has the capability of being president of the United States. I don't know if the media will treat him like that."

Host Don Lemon said that he could feel Rye's laughter without even looking at her. "Do you think they're equals?" he asked.

"No, they are not," she began. "Breaking, they're not equals. In addition to that, it's funny you think the curve is against him and he's not riding the curve. To the point of, 'Oh, he told the truth in one whole answer. Yay! Good job, Donald Trump.' Donald Trump didn't scream at her or say, look at that face. I don't think they will be judged on the same standard at all. In addition to that, when you look at how much they have told the truth, the fact her trustworthiness is in question is astounding to me. He lies so much because he comes across as authentic and wins the fight. It is amazing."

The group also hoped that Trump would be forced to give specifics on policy matters he has previously been pitching "secret" plans for.

Democratic strategist Maria Cardona hopes that moderator Lester Holt drills Trump on what those policies are and she too hopes Trump is treated equally. "I'm glad Paris said he wants to be judged as an equal. Because another thing that's come up in this last week, and I'm thrilled to see it. We'll see how it plays out tomorrow, is the fact that Donald Trump is the biggest liar we have had as a presidential candidate probably in history."

Dennard naturally flailed trying to disagree and claim that his candidate is a truth teller because it's Clinton that's the liar. They cited a recent Politico report that detailed Trump giving a false statement every three minutes and 15 seconds while for Clinton is was four times less.

Anti-Clinton commentator Andre Bauer tried to list off Clinton's lies dating back to the 1990s conspiracy theories and alluded to the idea that Clinton wiped her home server clean because there were photos of her in yoga pants on them. "Of course, if I saw her in yoga pants, I'd probably want to Bleachbit it again," he said.

The female commentators jumped on Bauer and Lemon stopped the discussion just to give him an opportunity to fix his statement so he didn't sound like he was attacking the female candidate for her appearance. "Wow! Andre, are you sure you want to say that?" Lemon asked. Bauer continued on his path but Lemon stopped the conversation entirely and asked again "Andre, hold on. Hold on. You shouldn't really say that about Hillary Clinton."

He didn't correct himself, except to say "I'm making fun at it."

"That was not funny, though" Rye could be heard saying.

Bauer returned to his 1990s conspiracies about Whitewater and alleging the Clintons murder people.

CNN's politics editor Mark Preston claimed that Trump isn't necessarily getting a pass from the media as it is the voters. "It is tied, now. It's basically tied," he said. "He has a shot of winning. He has a litany of things where he has erroneously said things, and he's still there. The voters don't care much about the facts."