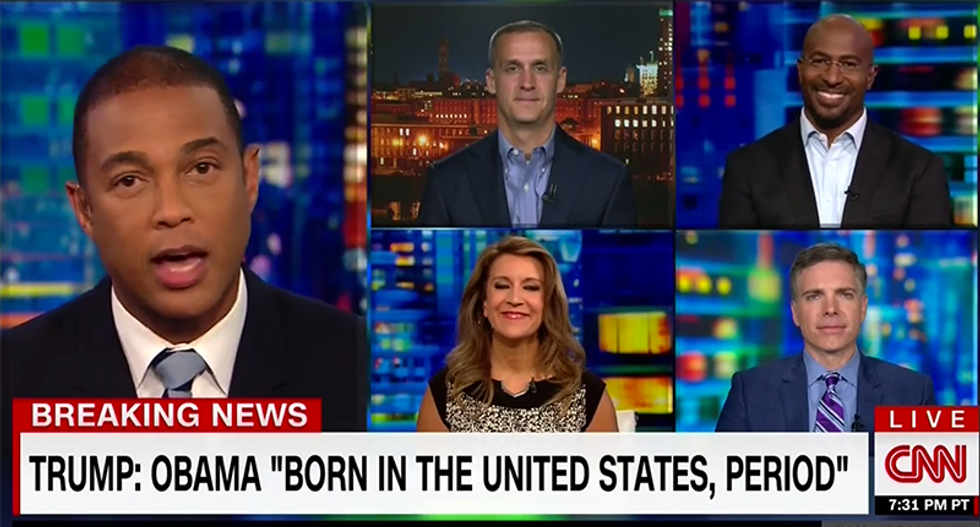 CNN's Don Lemon had to shut down his panel Friday evening after former Donald Trump employee (still paid by the campaign) and CNN paid contributor Corey Lewandowski had an outright meltdown live on television.

Lewandowski filibustered Lemon, who was attempting to read a statement from former 2007 Clinton campaign adviser Sidney Blumenthal denying any involvement in birtherism. Lemon tried multiple times to get Lewandowski to be quiet so he could read the statement, asking several times if Lewandowski could pause for a moment. Ultimately, Lemon had to ask the producers to pull everyone's microphone and everyone off the screen so he could read the statement. When the panel reappeared, Lewandowski was still moving his mouth, though his sound was still off, as if he had no idea what had just occurred.

Lewandowski tried to blame Clinton again, just as Trump and his campaign has attempted, but the panel groaned at him. He continued, saying he couldn't understand why it was still a controversy

"The reason it's still a controversy, Corey, is because he didn't say, 'His was disproven, it's wrong, here's why I continue with the innuendos for years and years,'" commentator Van Jones said. "He didn't give full context. Instead, he tried to blame his kid sister, Hillary, for everything he's done for the past five years. And because of that, it shows not just a lack of judgment in pursuing this, but now a lack of character, in not being a stand-up person and taking responsibility for your actions. And that's why it's still a controversy. I hope that helps you."

"Those same voices have said that he needed to apologize to the president, none of which he did," Lemon remarked.

Lewandowski tried to break in repeating, "No. No."

"They also said that he needs to admit he was wrong," Lemon continued.

"Look, when is Barack Obama going to apologize to Donald Trump for all the incendiary things he's said? Are we holding the president accountable?" Lewandowski closed.

Check out the videos below, part two via Media Matters: