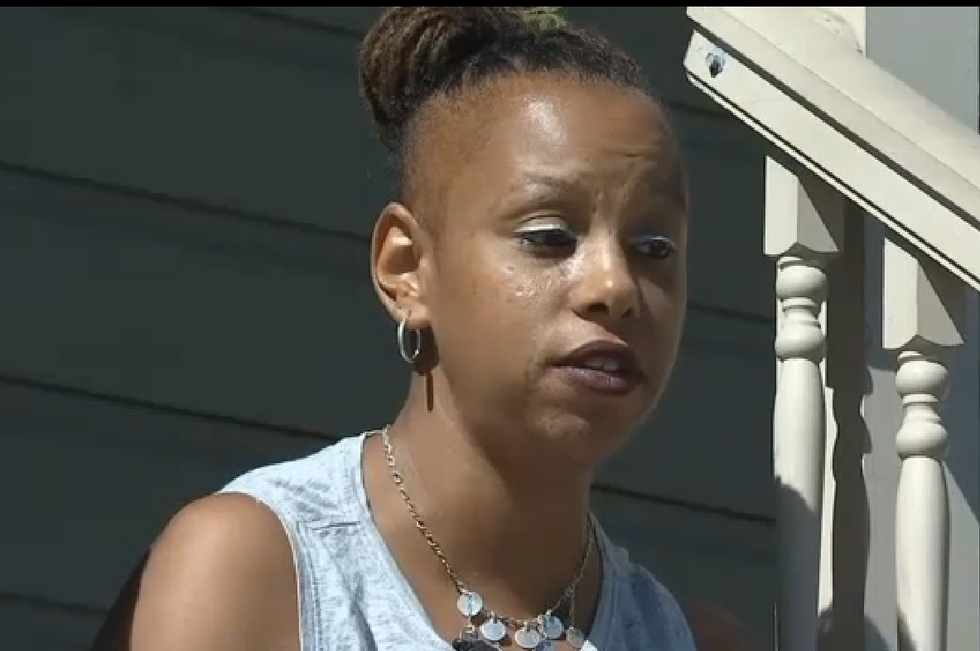 Vanessa White of Portland, OR tells Fox News 12 about the racist attack on her neighbor's grandchildren (Screen capture)

Police in Portland, Oregon are looking for a white or Hispanic man who pepper sprayed a black family with three children, then hurled a racial epithet as he fled the scene.

The Portland Mercury said that on Tuesday, 62-year-old Patricia Garner and her daughter 32-year-old Foia Frazer were packing Frazer's three children -- ages 12, 11 and 7 years -- into the car to go to their grandmother's house when a male cyclist rolled past the car, then turned around and blasted the children with pepper spray through the car's sun roof. He then shouted a racial epithet as he cycled away.

"The suspect turned around northbound, riding back by the car and sprayed the kids with pepper spray," said a press release from the Portland Police Bureau. "Garner reported to police that the man yelled a racial epithet at them as he pepper sprayed the kids then rode away."

One of the children -- a 12-year-old boy -- was rushed to a hospital emergency room, said the family's neighbor Laurel Carrasco. The fumes from the pepper spray still clinging to his skin were so intense that the physician who treated him had difficulty breathing.

"The fumes coming off the child were enough to choke one of the doctors," Carrasco told the Mercury. "He had to have several milk cloths put on him and eventually had to be sedated."

Carrasco stressed to the newspaper that there was no altercation leading up to the attack. The man on the bicycle seemed friendly at first, asked the family how they were doing, to which one of the children responded "Fine" before getting a face full of pepper spray.

Police spokesperson Sgt. Pete Simpson said that detectives are attempting to piece together what happened and track down the cyclist, who is described as "white or Hispanic male in his mid-20s, 5'9" tall, 160 pounds, wearing black spandex-style bicycle clothing and a grey and black helmet. The suspect was riding a road-style bicycle (not a mountain bike), with a white box on the back of the bicycle."

Police found the white box lying near the scene of the attack, but it contained only cycling tools and no identification.

The police statement about the incident said that the crime is being investigated as a bias attack and asked anyone with information about the crime to contact Detective Jeff Sharp at 503-823-9773 or via email at: jeff.sharp@portlandoregon.gov.

Another neighbor told Portland's Fox News 12 that the attack has shocked her and shaken her faith in her community.

"To have hate of that magnitude," marveled Vanessa White, "and to pour that hate on an innocent victim, a child that was helpless and cannot defend themselves? That's extreme."