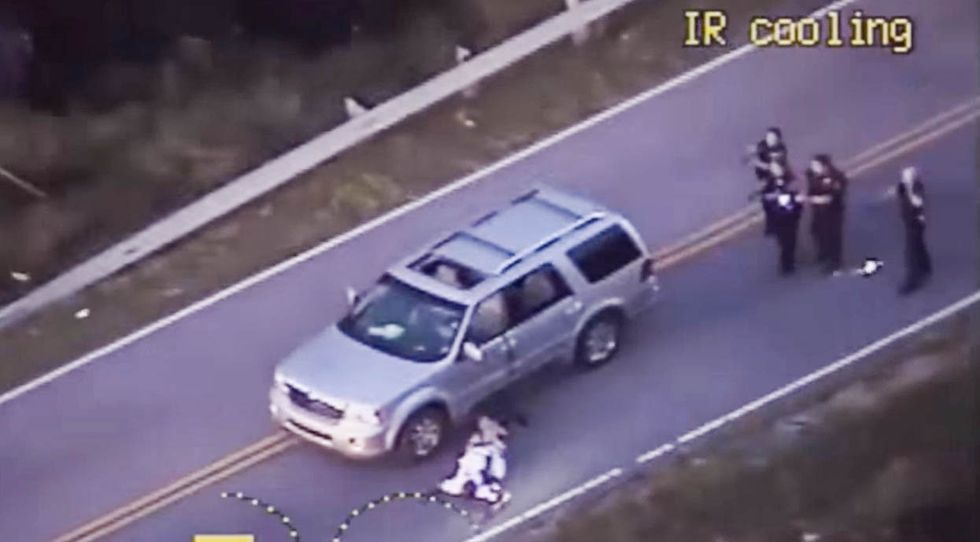 Helicopter footage of Terence Crutcher after being shot by police (screen cap).

The Tulsa Police Department on Tuesday claimed it found a vial of PCP in Terence Crutcher's van on the night that he was fatally shot by police officers.

Homicide Sgt. Dave Walker would not tell Tulsa World where in the vehicle the officers found the PCP, nor would he confirm that Crutcher had used the drug prior to being shot on Friday night.

The attorney for Officer Betty Shelby, who fatally shot Crutcher last week, says that she believed Crutcher exhibited signs of being high on PCP during her confrontation with him, although nothing has yet been confirmed about Crutcher's prospective drug abuse.

All the same, this alone wouldn't be enough to justify shooting Crutcher, who was several feet away from the officers and who was not making any moves toward them.

Shelby's attorney maintains that Shelby fired her weapon at Crutcher because he was reaching inside his car to grab something. However, the police discovered after the shooting that Crutcher was unarmed, and one of Shelby's fellow officers fired his taser gun at the same time she opened fire.

"Don't put out stuff that would demonize him and try to make him look like as if he was doing something nefarious. Put the entire story up," Crump said.

Crump told Tulsa World that even if Crutcher had used PCP that night, it still didn't justify the use of lethal force.

"If we started to condemn everybody to death just because they have drugs in their system, all our neighborhoods would be empty," he said.

Former President Donald Trump's campaign paid a total of $2.7 million to groups that organized the political rally that directly preceded the now-infamous riots at the United States Capitol building on January 6th.

Bloomberg reports that legal filings show the Trump campaign paid $1.7 million to Event Strategies Inc., the organization that was primarily responsible for the rally's stage and production management.