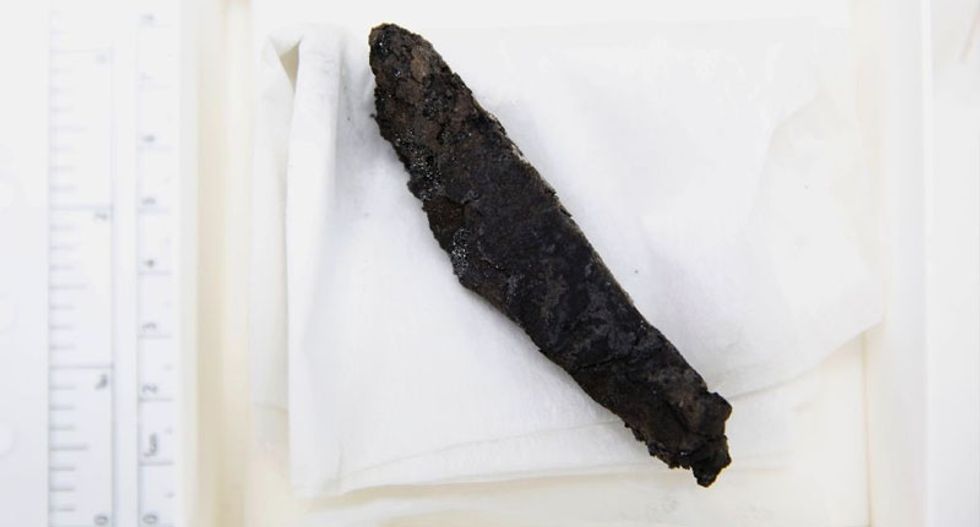 The scroll was found by archeologists in 1970 at En-Gedi, the site of a large, ancient Jewish community dating from the late 8th century BC (AFP Photo/Gali Tiboon)

An extremely fragile, ancient Hebrew scroll has been digitally unwrapped for the first time, revealing the earliest copy ever found of an Old Testament Bible scripture, researchers said Wednesday.

Known as the En-Gedi scroll, it contains text from the Book of Leviticus, and dates at least to the third or fourth century, possibly earlier, according to the report in the journal Science Advances.

The deciphering of its contents is described in the journal as a "significant discovery in biblical archeology."

The scroll is not the oldest ever found -- that honor belongs to the biblical Dead Sea Scrolls which range from the third century BC to the second century of the common era (AD).

Radiocarbon analysis has shown that the En-Gedi scroll dates to the third or fourth century AD.

Some experts think it is older than that. An analysis of the handwriting style and the way the letters are drawn suggests it could date to the second half of the first century or the beginning of the second century AD.

Its contents were long thought to be lost forever, because it was burned in a fire in the 6th century and was impossible to touch without dissolving into chunks of ash.

The scroll was found by archeologists in 1970 at En-Gedi, the site of a large, ancient Jewish community dating from the late 8th century BC.

Its fragments were preserved by the Israel Antiquities Authority for decades.

"Each fragment's main structure, completely burned and crushed, had turned into chunks of charcoal that continued to disintegrate every time they were touched," said the study.

So researchers used advanced digital scanning tools to "virtually unwrap" the scroll and see its contents, without ever touching it.

A micro–computed tomography (micro-CT) scan was able to pick up traces of metal in the ink.

"We were amazed at the quality of the images," said Michael Segal, head of the School of Philosophy and Religions at Hebrew University of Jerusalem.

"Much of the text is as readable, or close to as readable as actual unharmed Dead Sea Scrolls or high resolution photographs of them."

Before the scroll was digitally unveiled, experts believed the artifact may have been a Torah scroll.

But a look at the images showed it was the Book of Leviticus, from the third book of the Book of Moses.

This makes it the earliest Pentateuchal book -- relating to the first five books of the Jewish or Christian scriptures -- ever found.

The scroll shows 18 lines of text in each column, which were originally 35 lines long.

Like other ancient Hebrew scrolls, it contains only consonants and no vowels.

Symbols for vowels were not introduced in Hebrew until the 9th century.

"We were immediately struck by the fact that in these passages, the En-Gedi Leviticus scroll is identical in all of its details both regarding its letter and section division to what we call the Masoretic text, the authoritative Jewish text until today," said Segal.

Its uniformity with the medieval texts stunned researchers, who said it was 100 percent the same, both in its consonants and in its paragraph divisions.

"We have never found something as striking as this," said Emanuel Tov, professor emeritus in the department of Bible at Hebrew University of Jerusalem.

"This is quite amazing for us that in 2,000 years this text has not changed."

Researchers hope the techniques developed to read it will be used on other scrolls, including some from the Dead Sea Scroll collection, which have remained undecipherable until now, and others from disasters such as the eruption of Mount Vesuvius in the 1st century.

The technology, called "Volume Cartography" and developed with funding from the US National Science Foundation, will become freely available next year as open source software, researchers said.

It could also be useful to intelligence agencies or investigators.

"Damage and decay is the natural order of things, but you can see that sometimes you can absolutely pull a text back from the brink of loss," said co-author Brent Seales, professor and chairman in the department of computer science at the University of Kentucky.

"The En-Gedi scroll is proof positive we can potentially recover whole texts from damaged material, not just a few letters or a speculative word," said Seales.