Dr. Oz Show edited out Trump's creepy remark about kissing daughter Ivanka 'every chance I get' 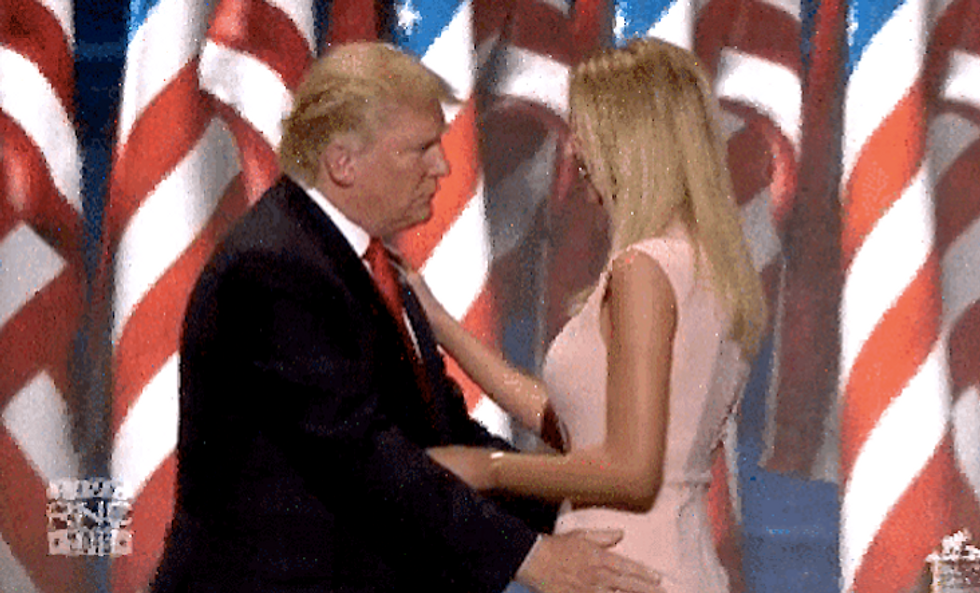 The production staff at The Dr. Oz Show edited out one of Republican presidential nominee's remarks from Wednesday's taping, the creepy moment when Trump talked about kissing his daughter Ivanka "every chance I get."

Mediaite pointed out that the remarks were missing from Thursday's telecast of the softball interview between Trump and Dr. Mehmet Oz.

Audience members present at Wednesday's taping said that when Trump's daughter Ivanka walked out on stage, the former reality TV star planted a kiss on her.

"It's nice to see a dad kiss his daughter," remarked Oz, according to NBC's Peter Alexander.

Trump replied, "I kiss her every chance I get."

The remarks were cut from the broadcast which aired Thursday.

Trump has said some awkward things regarding Ivanka's attractiveness in the past, telling a panel on The View that "I’ve said if Ivanka weren’t my daughter, perhaps I’d be dating her.”

He told Rolling Stone magazine, "Yeah, she’s really something, and what a beauty, that one. If I weren’t happily married and, ya know, her father . . . ”

And in a 2003 Howard Stern interview, Trump said, "You know who’s one of the great beauties of the world, according to everybody? And I helped create her. Ivanka. My daughter, Ivanka. She’s 6 feet tall, she’s got the best body.”

And, of course, there was the creepy buttock-pat Trump did when hugging Ivanka before her speech at the Republican National Convention: