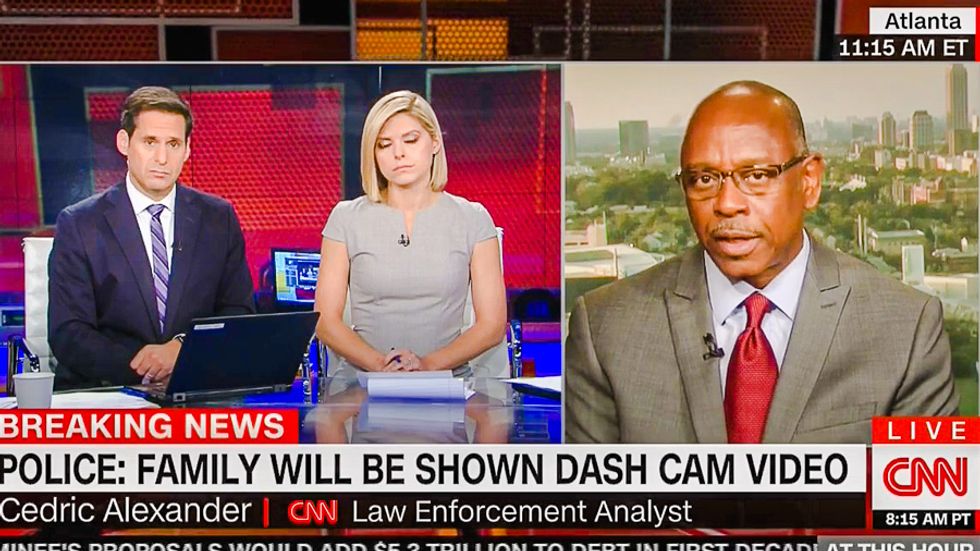 Cedric Alexander, the former police chief of DeKalb County, warned CNN hosts on Thursday that they were muddying the facts regarding the death of a Charlotte man by delving into his criminal record.

On Tuesday, police shot 43-year-old Keith Lamont Scott while attempting to search for another man with outstanding warrants. Although the Charlotte Police Department stated that Scott was repeatedly told to drop his weapon, Chief Kerr Putney admitted on Thursday that video of the shooting did not prove that he was holding a gun when he was shot.

Follow Putney's press conference on Thursday, CNN correspondent Polo Sandoval revealed that he had been digging into Scott's criminal history, which includes an assault charge and prison time.

"We are discussing this for two reasons," Sandoval explained. "Because it now tells us that Scott did, in fact, at least have a past as a violent -- or a violent conviction in his criminal history. And it also is important here because state law prevents -- or at least calls it unlawful for a convicted felon to be in possession of a firearm."

"It's important to keep in mind we now know that Keith Scott did have at least a violent past going back to 2002 when he was convicted of aggravated assault with a deadly weapon," the CNN correspondent opined.

CNN host John Berman noted that there was no evidence that Charlotte police officers were aware of Scott's record when he was shot to death.

Alexander suggested that CNN had been out of line with the report on Scott's criminal record.

"When we start to receive information about someone's criminal past, we have to be very, very careful when we insert that information because it comes across as being defensive," he explained. "That's exactly what you guys are alluding too and that's what you oftentimes hear people in the community say. We have a case involving a subject but somehow the criminal past is brought into play."

"In the course of this investigation that is being viewed by the public in Charlotte and across the country and around this world, when you insult that type of information, you have to be very careful to separate it from what we know happened up to this point," he added. "Because the perception is going to be from a group of people who are very frustrated, very angry, very mad about what's going on across the country, and quite frankly very frightened."

"Inserting that is to say, 'Hey, he was a criminal anyway.' He may have had a criminal past but we have to look at the relevancy of these cases."