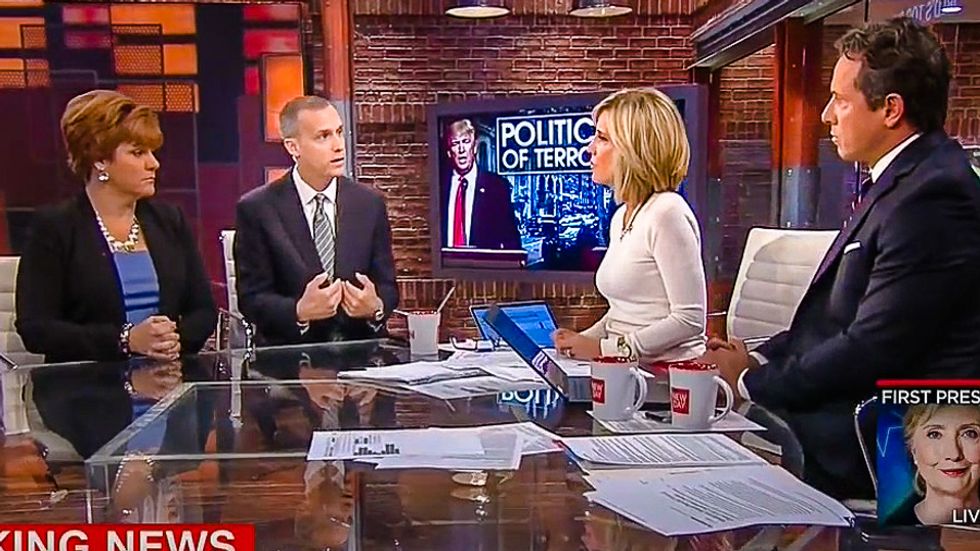 CNN contributor and former Trump campaign manager Corey Lewandowski was called out by CNN hosts on Monday for suggesting without evidence that immigrants were to blame for the recent explosion in New York City.

Officials said on Monday that they were searching for 28-year-old Ahmad Khan Rahami in connection with multiple attempted bombings in New York and New Jersey. According to The New York Times, Rahami is a naturalized U.S. citizen who was born in Afghanistan in 1988.

"It re-highlights the problems we have with our immigration system," the former Trump campaign manager opined. "What we know is that 40 percent of people that are in the country illegally have over-stayed their visas. And what we know here from the reports this morning is that this person either is potentially of Afghani [SIC] descent."

"Is that what the report is for this person who has potentially committed a terrorist attack?" Lewandowski wondered.

"Did he enter the country illegally?" Lewandowski asked, fishing for information. "Was the proper [vetting] work done? The San Bernardino killer came into the country on a K-1 visa."

"You are making a connection that we don't know yet," Camerota observed.

Ignoring the CNN host, Lewandowski declared that Trump would "make our immigration policy such that we don't have terrorists coming here."

However, Hillary Clinton surrogate Christine Quinn argued that "to make this about immigration is factually untrue."

"Manipulating a horrible situation for political means," she said. "What we want the president of the United States to be is exactly the opposite of that. That is manipulation for self gain and the last thing this country needs at times like these."