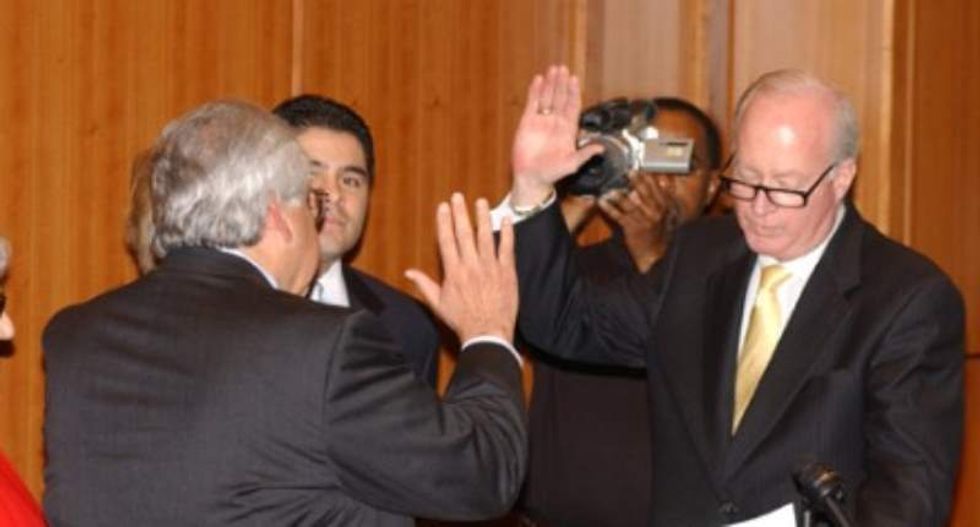 A federal judge being investigated for sexual harassment retired, guaranteeing himself a $203,100 annuity for the rest of his life, San Antonio Current reported.

District Judge Walter S. Smith of Waco submitted his resignation to President Barack Obama late last week. He had been hit by Judicial Council of the 5th U.S. Circuit Court of Appeals with a one-year suspension from hearing criminal or civil cases filed after Dec. 3 and was also reprimanded for making "inappropriate and unwanted physical and nonphysical advances" against a former clerk in 1988. The judge's retirement ensures that he will continue making his current salary.

The investigation against Smith was touched off by a complaint filed in 2014 by Dallas attorney Ty Clevenger, who has also called for him to be impeached from the bench.

"Well, the first thing that comes to mind is good riddance," Clevenger told the Waco Tribune. "It is just unfortunate it took this long and so much effort to get him to do the right thing. The 5th Circuit should have recommended impeachment the first time."

The former clerk gave a deposition in 2014 detailing her encounter with Smith, which she said left her afraid of "walking out into the hall and running – running into him."

According to the deposition, Smith -- who was appointed to the bench by then-President Ronald Reagan in 1984 -- asked her to come to his office. She imagined that he wanted to discuss a position as a clerk for him.

Instead, she said, Smith "basically came over to me and put his arms around me and kissed me, and I just froze. I couldn't move. And he said, 'Let me make love to you.'"

When she rejected the suggestion, Smith "pulled me to him again, and he kissed me again and stuck his tongue down my throat, and he pressed himself against me. I could tell he had an erection, and he said, you know, 'A couch right here.'"

The woman said that Smith's breath "smelled like liquor" at the time of the attack. Later in the day, she said, he called her and asked her to take a trip with him. She subsequently told supervisors that she was quitting, prompting them to offer her six weeks paid leave if she would reconsider.

When she tried to return to work, she said, she found she was overcome with fear that she would encounter Smith again.