‘Get him, baby!’: Oregon white supremacist brutally kills black teen as girlfriend cheers him on 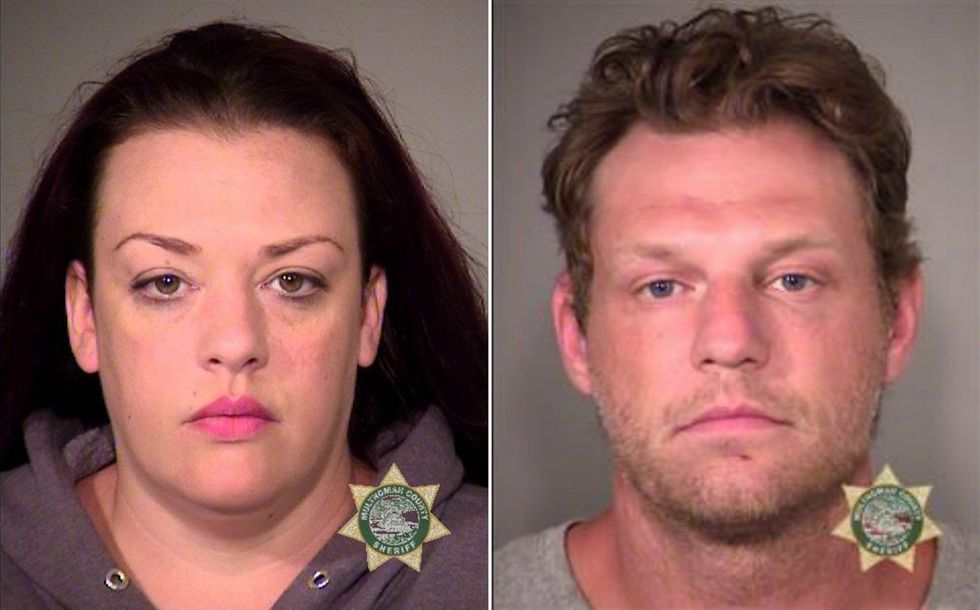 A Gresham, Oregon white supremacist and his girlfriend are charged with running down and killing a black teenager with their vehicle in a horrifying confrontation earlier this month.

The New York Daily News reported that Russell Courtier, 38, and Colleen Hunt, 35, have been arrested and charged with murder in the death of 19-year-old Larnell Bruce, who they reportedly chased down and killed with Courtier's Jeep on Aug. 10.

Bruce and a group of friends were gathered outside a 7-11 store in Gresham, which is located near Portland when Courtier and Hunt drove up in Courtier's red Jeep.

Security camera footage from the scene shows that a fight broke out almost immediately. Courtier -- who has had multiple run-ins with the law and served time in federal prison, where he became a gang leader -- is shown beating Bruce's head against the store's plate glass window.

The Portland Mercury said that Hunt egged Courtier on, shouting "Get him, baby!" over and over as the fight progressed.

Bruce reportedly pulled a knife to defend himself, which was when Courtier got back into the Jeep and -- with Hunt screaming encouragement -- chased the teen, who tried to flee the scene on foot.

The Mercury said that according to court papers, Courtier “across oncoming lanes of traffic and then intentionally struck him with the front of the vehicle.”

The 7-11 clerk called police during the fight. When officers arrived, they found Bruce lying in the road bleeding from his head and ears. The teen suffered extensive brain injuries and died days later in the hospital.

Courtier and Hunt were apprehended by police within hours and admitted to striking Bruce with their vehicle. A grand jury indicted them on murder charges on Aug. 18.

The Mercury reported that Courtier has an extensive police record and has spent most of his adult life behind bars or under police supervision. At the time of the attack on Bruce, Courtier was on parole for a 2013 knife attack on a woman in Clackamas County.

In prison, he became notorious as a leader of white supremacist gang the European Kindred or EK. His prison records show that he was deeply involved in the EK for more than a decade and a half.

"He first connected with the gang while serving several years at the Eastern Oregon Correctional Institution in Pendleton following a 2001 attack on a man, the records show," wrote Doug Brown of the Mercury. "By September 2003, Courtier was caught in his cell with a drawing of the gang’s logo -- a shield emblazoned with letters 'EK' -- that he admitted he intended to get tattooed on his body (he was found to have violated the prison’s 'unauthorized organization' rule, because EK is a known 'security threat group')."

Courtier racked up numerous serious violations of the law both inside and outside of prison. He's had four felony convictions and seven misdemeanors. His juvenile record also shows a long list of robberies, assaults and other crimes.