'I didn't think it was a big deal,' Hillary Clinton says of pneumonia bout 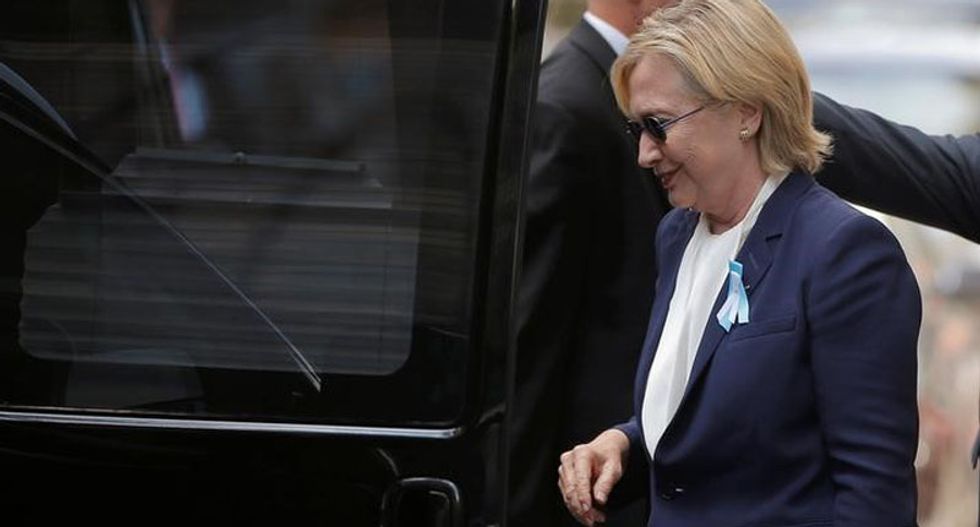 Democrat Hillary Clinton said on Monday she could resume presidential campaigning in a couple of days after a bout of pneumonia that she initially had not believed was "that big a deal."

Clinton's health scare after she almost collapsed at an event on Sunday, causing her to cancel some campaign trips, revived concerns about a tendency toward secrecy that has dogged her campaign, and underscored perennial worries about the medical fitness of candidates for one of the world's most demanding jobs.

"Well, it will be in the next couple of days. ... I just want to get this over and done with and get back on the trail as soon as possible," she said in an interview on CNN on Monday night, adding she had ignored doctor's orders to rest.

"I just didn't think it was going to be that big a deal."

Her campaign acknowledged on Monday it may have been too slow disclosing her pneumonia diagnosis after she nearly fainted at a New York memorial ceremony for the Sept. 11, 2001, attacks. She was diagnosed with the lung infection on Friday.

"I think that in retrospect, we could have handled it better in terms of providing more information more quickly," Clinton spokesman Brian Fallon told MSNBC earlier in the day.

The health problem was the latest blow for the Democratic presidential nominee at a time when Republican rival Donald Trump has erased most of her lead in national opinion polls and is competitive again in many battleground states where the Nov. 8 election is likely to be decided.

Clinton, 68, said she had dealt with similar episodes of dizziness before. “You know, it is something that has occurred a few times over the course of my life. I’m aware of it and usually can avoid it,” she told CNN.

Asked if she passed out during the incident on Sunday, she said: “No, I didn’t. I felt dizzy and I did lose my balance for a minute. Once I got in. Once I could sit down. Once I could cool off. Once I had some water, I immediately started feeling better.”

Her campaign said her husband, former President Bill Clinton, would campaign on her behalf while she rests.

Both Clinton and Trump, 70, said they intended to release more of their medical details in the coming days, as their campaigns gear up for the November election.

Questions about the incident reinforced the perception of Clinton as secretive, a view fueled by the controversy surrounding her use of a private email server while serving as President Barack Obama's secretary of state from 2009 to 2013.

A federal investigation of that issue said she was "extremely careless" in her handling of classified emails, but did not recommend criminal charges.

Trump said on Monday that health was a campaign issue but he did not attack Clinton over her physical condition. "I just hope she gets well and gets back on the trail," he said in an interview with Fox News.

He focused his criticism on comments by Clinton last week in which she dismissed half of his supporters as a "basket of deplorables" of racist, homophobic people. Clinton said she regretted the remark.

Trump has compared the comment with a much-criticized remark by 2012 Republican presidential nominee Mitt Romney that 47 percent of the electorate was dependent on the government.

“I was deeply shocked and alarmed to hear my opponent attack, slander, smear, demean these wonderful, amazing people who are supporting our campaign by the millions,” Trump told a conference of National Guard members in Baltimore.

Trump has himself aroused controversy with comments in which he called some Mexican immigrants criminals and rapists, questioned whether a U.S.-born judge could be fair because of his Mexican heritage and criticized the Muslim parents of an American soldier who died in combat in Iraq.

Clinton's pneumonia disclosure was made public hours after her campaign said she had become "overheated" to explain why, her knees buckling and unsteady, she was rushed from the Sept. 11 ceremony.

"The short-term turbulence will be more about the handling of this than the substance," David Axelrod, a former political adviser to Obama, told Reuters.

"Antibiotics can take care of pneumonia," Axelrod tweeted later. "What's the cure for an unhealthy penchant for privacy that repeatedly creates unnecessary problems?"

Trump had suggested for weeks that Clinton lacked the energy needed to be president. He has raised questions about her stamina, reprising a tactic from the Republican primary campaign when he derided rival Jeb Bush as a "low-energy" candidate.

Democrats said her attendance at events despite her pneumonia diagnosis proved her toughness.

Trump's campaign has issued a short letter from his doctor saying he was in excellent health with "extraordinary" strength and stamina. But the letter did not mention what medicine Trump might be taking or other details typically included in such disclosures.

In July 2015, Clinton released a two-page letter outlining her medical condition that sought to reassure Americans about her health after she fell and suffered a concussion at home in 2012 near the end of her tenure as secretary of state.