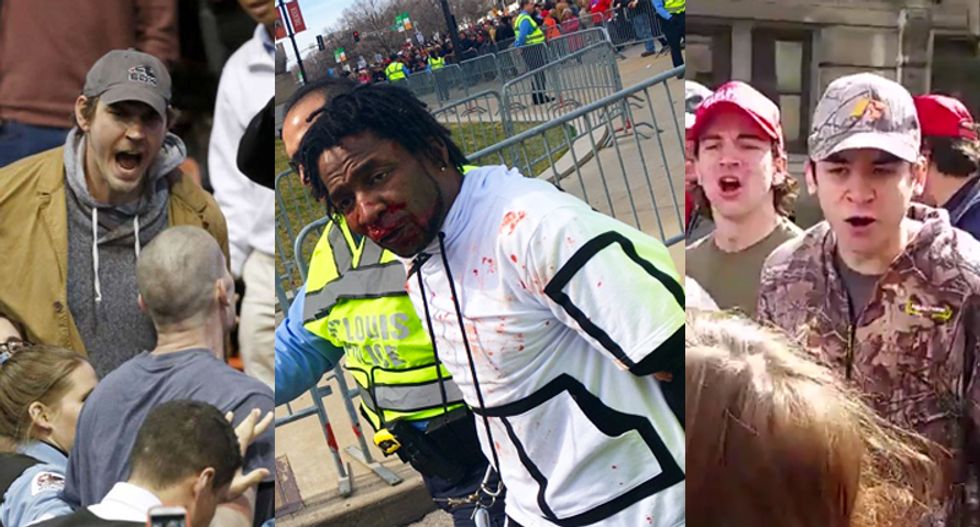 It has been widely reported that outside a Trump rally in Asheville, North Carolina, Monday night, Sept. 12, a 69-year-old woman was “cold-cocked” (her word) by an irate Trump supporter. The woman, Shirley Teter, later asked a reporter rhetorically: “Why did I get involved yesterday, at my age? Because I ran into another situation that was sickening my heart.” Ms. Teter preserved her sense of whimsy and irony, for she also asked whether “people find a Trump supporter punching her in the face deplorable.”

The man who punched Ms. Teter had broken loose, at least momentarily, from his basket. But the basket in Asheville was actually bigger than most of the media noticed. NBC Newsreported, but other news outlets did not, that earlier, at the rally, as Trump was denouncing Hillary Clinton for having called “half” of his supporters “a basket of deplorables,” a Trump supporter in the back of the hall grabbed a protester around the neck and then, with his fists, tried to punch him. According to NBC, “a member of Trump’s advance team held him back” — to his credit — and but then, as he escorted him and other protesters down the steps,

And here’s what happened next, again according to NBC:

What we seem to have here is a case of the normalization of the deplorable. Or rather, three cases. For one, the police permitted the assailant to remain. For a second, Trump’s security people went along. At the same time, the woman wearing the hijab had a right to be there unmolested. Wearing a hijab at a Trump rally is making a statement, and surely deserves police protection.

I bring this up by way of noting that, when Trump supporters started punching out protesters at his rallies last March, many reporters noticed and many observers — including this one — commented on Trump’s sinister taste for vigilantism. The howls of rage from Trump supporters were comparable, though possibly more frequent, than George Wallace’s in 1968. Like Wallace then, Trump rejoiced using the protesters as props, I wrote this in The Washington Post:

Blood shouts are back…In Las Vegas last month, Trump said of one protester, “I’d like to punch him in the face,” waxing nostalgic for an era when protesters would be “carried out on stretchers.” “We’re not allowed to push back anymore,” Trump rued. The day after an enthusiast threw a sucker punch at a demonstrator being led out of a Fayetteville, North Carolina event, Trump said: “The audience hit back. That’s what we need a little more of.”

Well, we have gotten a lot more of it, and it’s disturbing that Trump’s outrages are so frequent that the mob atmosphere at his rallies is evidently no longer terribly “newsworthy.” While Benghazi and emails remain part of everyday reporting over the months, journalists don’t remind us of Trump’s earlier incitements. The mob outbursts and the incitements have become routine, part of the furniture — sort of like Trump’s remarkable 70-year-old hair, no longer worthy of comment. Another day, another deplorable outburst, either from the candidate or his deplorables or both.

Once again, one has to sympathize with news people as they are confronted with Trump’s steady bursts of venom, deception and ignorance. If they covered them all equally, would there be any space left for Syria, North Korea or the Clinton emails? It’s a genuine professional problem, and I sympathize with the editors who have to make the daily news judgments as to which dog-biting men are worth more attention than others.

Still, the danger for journalism, as also for the republic, is evident. The new normal is a grotesque abnormality. If outbursts of violence, as of venom, fade into the hush of background noise, the deplorables have won. Journalists have to stop taking mob violence for granted.