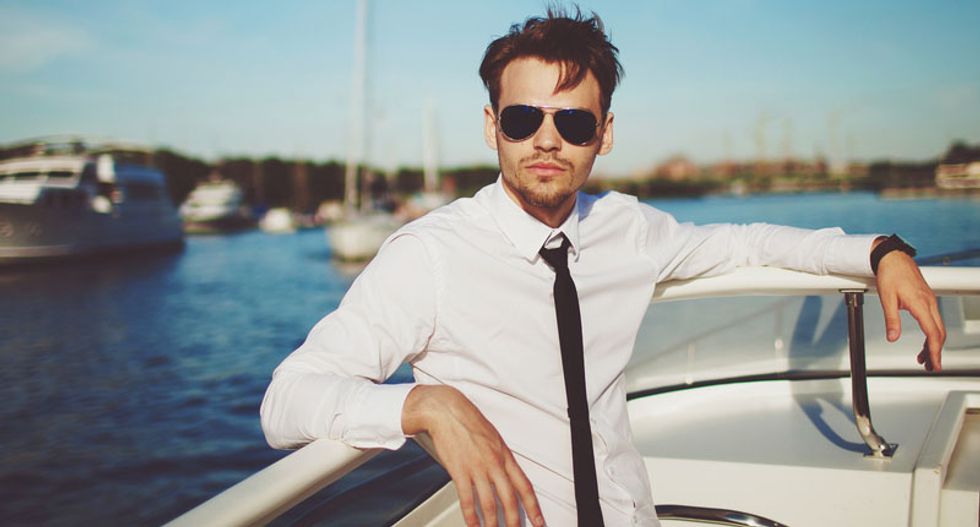 Wealthy man on his yacht (Shutterstock)

Webster's dictionary tells us that Labor Day was "set aside for special recognition of working people."

That's nice, but "set aside" by whom? It certainly wasn't the Wall Street corporate and political powers that be. They nearly swallowed their cigars when the idea of honoring labor's importance to America's economy and social well-being was first proposed in 1882. Rather, this holiday was created by the workers themselves, requiring a 12-year grassroots struggle that finally culminated with an act of Congress in 1894.

The campaign helped coalesce unions into a national movement. And its message of labor's essential role also countered the haughty insistence of the robber barons of that time. The barons insisted they were America's "makers"—the invaluable few whose monopolistic pursuits should be unfettered. For they claimed that they and their corporations were the God-ordained creators of wealth.

Despite their bloated sense of self-importance, notice that the American people do not celebrate a CEO Day. Indeed, as Abraham Lincoln put it, the real makers are the many ground-level workers who actually do the making: "Labor is prior to and independent of capital," Abe declared in his first state of the union address. "Capital is only the fruit of labor, and could never have existed if labor had not first existed. Labor is the superior of capital, and deserves much the higher consideration."

Yet on Labor Day, robber barons are again ascendant, declaring that they owe nothing—not even a shared prosperity—to the workers, consumers, taxpayers, and other American people who sustain them. Quite the opposite, they and their political henchmen are blithely shredding America's social contract and again insisting that the corporate elite must be unfettered, unions eliminated, and middle-class jobs Wal-Marted.

This intentional hollowing out of our middle class is not just ignorant, but also immoral

Yet today's establishment economists are asking: Why are so many people so glum? The Great Recession ended in 2009, they note, and even job creation is picking up. So come on people—get happy!

Maybe Labor Day is a good time to clue them into one big reality behind this so-called "recovery:" Most Americans haven't recovered. Not by a long shot. In June, median household income was still $3,400 less than in 2007, when Wall Street's crash started the collapse of our real economy.

Why are working people still so far down? Take a peek at those new jobs the economists are hailing. They're really "jobettes," paying only poverty-level wages, with no benefits or upward mobility. In the recession, about 60 percent of the jobs we lost were middle-wage positions, paying approximately $14 to $21 an hour. Most of those jobs have not come back. Instead, of the jobs created since the recovery began, nearly six out of 10 are low-wage, paying less than $14 an hour. A central fact of the new American economy is that working-class people are increasingly unable to make a living from their jobs.

To grasp this widening inequity, befuddled economists might bite into a burger or pizza. Seven of the 12 biggest corporations that pay their workers the least are fast-food giants. Yum! is one. It's a conglomerate that owns Pizza Hut, KFC, and Taco Bell. Workers don't find these chains so yummy; for pay averages $7.50 an hour, with no health care, pensions, etc. In contrast, Yum!'s CEO hauls off about $20 million a year, even as even as he dispatches lobbyists to oppose any hike in our nation's miserly minimum wage.

This is no way to run a business, an economy, or a society. Fast-food giants are hugely profitable. (Yum! quaffed down $1.3 billion in profits last year alone.) They are more than able to pay living wages and decent benefits, as many local, independently-owned fast-food businesses do. Deliberately and unnecessarily holding down an entire workforce by funneling rightful wages into the coffers of a few ultra-rich executives and big investors is shameful—and dangerous. After all, even a dog knows the difference between being stumbled over ... and being kicked.

At last, workers are beginning to kick back. All across the country, broad coalitions of religious leaders, unions, civil rights groups, community supporters, and others are joining thousands of fast-food workers in a rolling series of one-day strikes against particular chains, publicly shaming them for profiting through gross exploitation of employees. As one Baptist church leader said of his presence in these protests, "It's a matter of justice."

Yes—and that's what Labor Day has always been about.

To find out more about Jim Hightower, and read features by other Creators Syndicate writers and cartoonists, visit the Creators Web page at www.creators.com.

The US president-elect Joe Biden did two spectacular things last week which may rewrite the assumption that his presidency would return America back to the Barack Obama era. One was the $1.9 trillion COVID-19 relief plan Biden rolled out Thursday and the other his choice of William Burns, veteran diplomat, to lead the Central Intelligence Agency.

Seemingly unrelated, these two things convey a powerful signal that Biden understands that the real pandemic danger in America is social collapse and what is needed is a national policy that prevents societal disintegration — and a foreign policy which reflects that top priority.