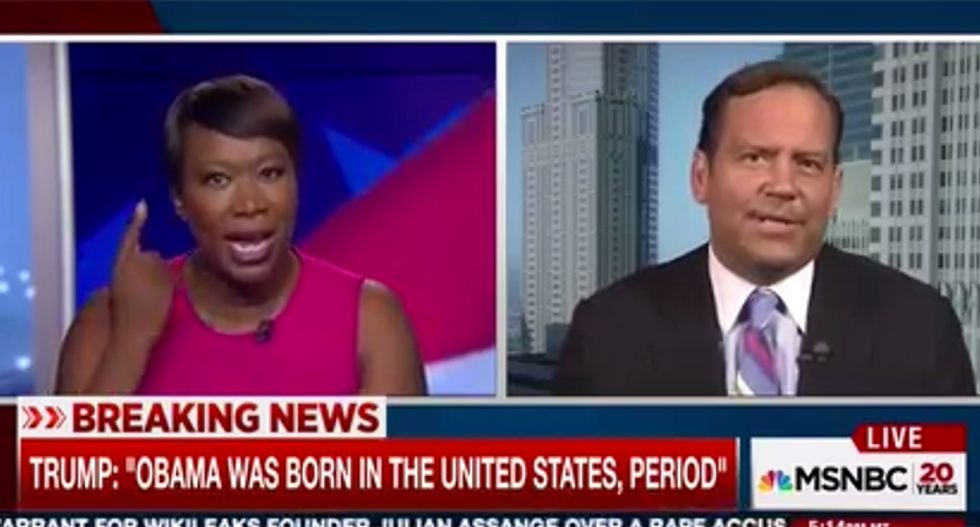 Joy Reid has been on a roll this week when it comes to explaining the root of Donald Trump's birtherism and how it has played out in African-American communities. But, Friday night on "Hardball," Reid went up against Trump's National Hispanic Advisory Councilman in the most brilliant way.

Cortes was already between a rock and Chris Matthews' hardball before he even spoke up, but Matthews began their conversation demanding Cortes explain the evidence Trump had surrounding the birther issue. Cortes, of course, could not, instead saying that he personally always said the birther issue was a mistake.

At one point, Matthews filibustered the panel telling them, "I have been pounding this issue for the first time it showed its ugly head five years ago. Most people are appalled that the first African-American president would be relegated to the position of illegal immigrant.

"They said he's from Kenya!" Matthews exclaimed. "Of course it's racial! Let's go back to reality here," he said moving to Joy Reid to cut in. "Obviously this is ethnic, obviously."

Reid agreed, bringing up the old GOP rallies when President Obama first ran. "One of the common features at Republican rallies was to say very pointedly, Barack 'Hussein' Obama, to emphasize that middle name. That was done quite often. Second point, why is that African-Americans, who have not up until now have really been the target of Donald Trump's diatribes, why is it that African-Americans are the most diametrically opposed to him of any group, more so than Hispanics, who have been the direct targets? More so than any group."

Reid argued that it was the birther campaign that pushed them away from ever being Trump supporters. "Because of the high mutilation, the attempt to humiliate the first black president is it's the main charge. Donald Trump embodied that and used it to rise. Ben Carson wouldn't have even been a thought as a presidential candidate had he not tried to embarrass the president."

She also noted what she called the "Putinism" we see on the right. "What do they say? They think Vladimir Putin is a better leader because he loves his country more than Barack Obama loves his. That was said as recently as today. And so you have Republicans making the case that President Obama doesn't love the country he's president of. And this is all part and parcel of the birtherism that Donald Trump rode to fame and to the presidential nomination."

Cortes attempted to explain that Trump has not once said those exact words, but the panel outright laughed.

"I've been listening to Donald Trump since I lived here in the late 1980s and I think people understand him. If you're black — we hear him," Reid said.

Check out the full video of the discussion below: