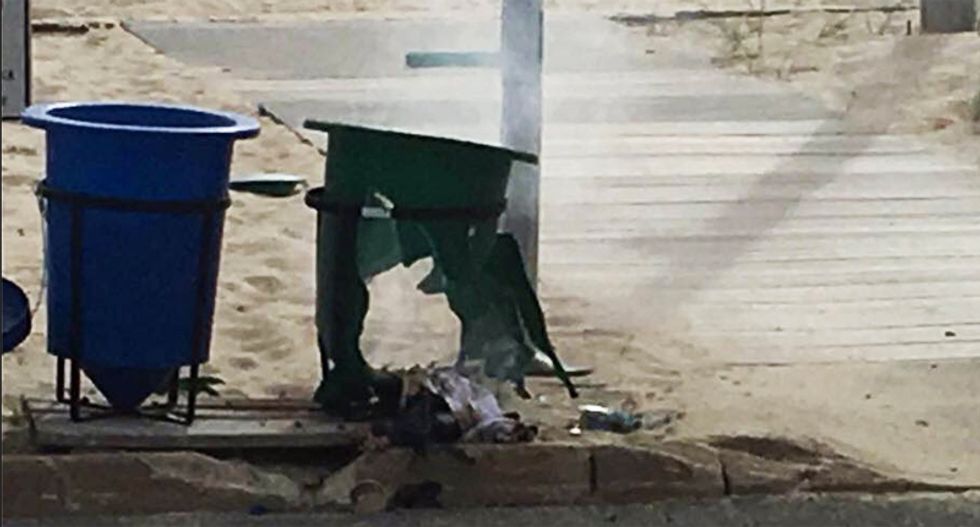 A small bomb exploded in a New Jersey beach town along the route of a planned road race on Saturday morning, causing no injuries but prompting authorities to cancel the event and evacuate dozens of homes as they searched for more devices.

No damage to surrounding structures was reported after the device went off at 9:35 a.m. in a garbage container ahead of a 5 km charity race in Seaside Park, a resort about 80 miles south of New York City, the Ocean County prosecutor's office said on Facebook.

Even so, the explosion stirred dark memories of the deadly blasts at the finish line of the Boston Marathon in 2013 that killed three people and wounded more than 260 others.

The charity run was organized to benefit military veterans and the families of those lost in military service. The run's name, Seaside Semper Five 5K, is a reference to Semper Fidelis, Latin for "always loyal," the motto of the U.S. Marine Corps.

Law enforcement authorities have made no comment about a possible motive for the blast.

The explosion occurred five minutes after the 5 km race was originally scheduled to start at 9:30 a.m.

The explosive went off near the boardwalk by the intersection of Ocean Avenue and D Street, authorities said. According to a course map for the race posted online, runners would have passed near the intersection twice: once 0.7 miles into the race and again 0.7 miles from the finish.

A 1-mile "fun run" was due to begin at 9 a.m. It was not immediately clear whether it got off on schedule nor whether its route would have taken runners near the site of the blast.

Authorities were evacuating about 30 homes, many of them summer homes, near the site of the explosion, Ocean County Sheriff Michael Mastronardy said in a phone interview. He said authorities were in the initial phase of their investigation and trying to keep people safe.

A second device was found near the site of the explosion, according to news website NJ.com, quoting the prosecutor's spokesman, Al Della Fave. It was not immediately clear whether the second device was detonated, the website reported.

Authorities including the FBI were in the town and were investigating the possibility there was at least one other unexploded device, the office said.

About 5,000 people were set to run the 5 km charity race in Seaside Park, a family-oriented resort known for its beachside boardwalk, a local NBC affiliate reported. The race was to begin at 9 a.m. but was delayed because of late sign-ins and then canceled after the explosion, the affiliate said.

A seafood festival at nearby Point Pleasant Beach scheduled for Saturday was canceled after the explosion, apparently as a precaution, the county sheriff said on Twitter.

At the 2013 Boston Marathon, two brothers of Chechen ethnicity who professed allegiance to Islamist militants planted homemade bombs near the finish line of the renowned race. The subsequent explosions killed and maimed dozens of bystanders in the most high profile attack on U.S. soil since Sept. 11, 2001.