Morning Joe thinks Hillary has a point on Trump fans: Wanting to ban a religion is 'deplorable' 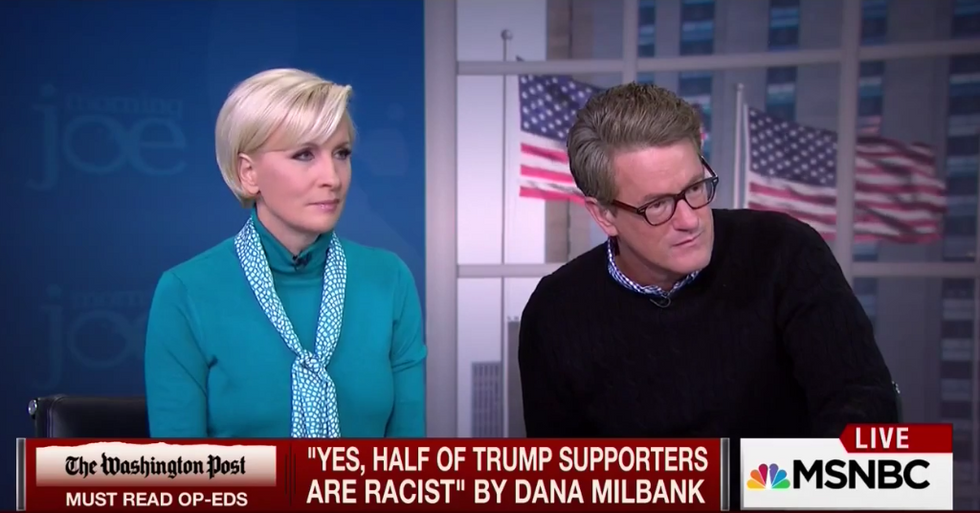 Although Hillary Clinton has walked back her assertion that half of Trump supporters are "deplorable," that hasn't stopped the news media from debating whether or not she had a point.

Morning Joe on Tuesday ran down survey results and found that a large chunk of Trump supporters really do harbor racist viewpoints.

"An outrageously high number of Trump supporters support a Muslim ban," said co-host Joe Scarborough, referencing polls of Trump fans. "[Trump supporters] support a national database, where if you're a Muslim you have to check in, I guess. Instead of the Star of David, maybe they put another patch on you. An outrageous number actually said they wanted to make Islam illegal in the United States. You can call that a lot of things, I call it deplorable."

The show then ran a clip of vice-presidential nominee Mike Pence refusing to say if notorious racist David Duke was "deplorable" or not.

"This is the kind of thing that makes you die inside," co-host Mika Brzezinski said of the clip.