MSNBC analyst: Clinton can't laugh, cough or shout at debate -- but Trump 'just has to be affable' 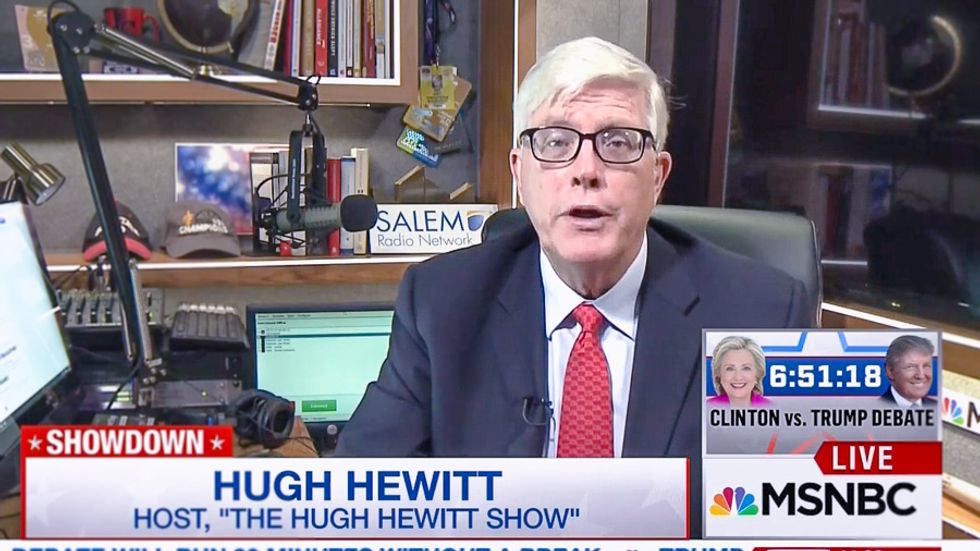 MSNBC contributor Hugh Hewitt suggested that Republican nominee Donald Trump merely had to show up with a smile to win Monday night's debate, and he warned that Democratic opponent Hillary Clinton could lose the contest by simply laughing.

"I spent 10 hours in total across the stage from Donald Trump in four separate [primary] debates," Hewitt explained to MSNBC host Thomas Roberts. "He is a very accomplished performer as someone would expect from someone who spent 10 years on a reality television show under the lights."

"I think the pressure is actually on Secretary Clinton," he opined. "She has so many things she can't do. She cannot cough, she cannot laugh with the distinctive Hillary laugh, she cannot shout like she did at her supporters last week and she cannot condescend."

"On the other hand," Hewitt added. "Donald Trump just has to be affable."

According to the conservative radio host, Trump "has a great ability when he doesn't have any idea what the right answer is to answer the question at length without giving that away."

"And so while I believe the expectations game favors Donald Trump, he brings a lot of strengths to this of experience and performance in debates and reality television past."