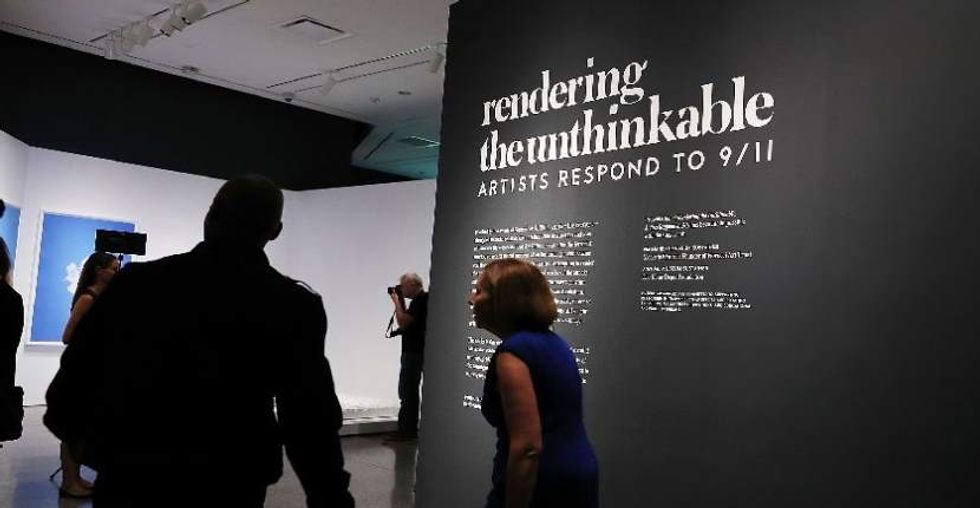 People attend a preview of the new exhibition at the 9/11 Memorial Museum titled "Rendering the Unthinkable: Artists Respond to 9/11" on Sept. 1, 2016 in New York City (AFP/Spencer Platt)

On the 15th anniversary of the September 11 attacks, the New York museum that honors that dark day in US history is turning to something lighter: art.

Visitors to the National September 11 Memorial Museum's new exhibit "Rendering the Unthinkable" are not being asked to relive the violence through turbulent canvases or painful performances.

Rather they are taken on a journey to soothe the pain and reflect on a terror attack that is now part of New York's DNA.

Opening on September 12, one day after the 9/11 anniversary, the exhibit will feature works by 13 local artists -- paintings, video and sculptures.

Each lived through the 2001 attacks in his or her own way, including one who lost his firefighter brother, whose body was never found.

Several, such as Ejay Weiss, incorporated ash from Ground Zero into their works. His four acrylic paintings enhance the chaos, with a calming square of blue sky in the center.

The now-distant morning when the Twin Towers of the World Trade Center were struck by hijacked airplanes, claiming 2,753 lives, is one New York still remembers well.

As horror rained down on the city, additional deadly attacks were carried out on the Pentagon and on a commercial airplane that crashed in rural Pennsylvania.

A few days after the attacks, Manju Shandler began creating paintings to represent each of the victims.

"At the beginning, we didn't even know how many had died," she said. In the end she painted nearly 3,000 victims, and 840 of the paintings will be displayed at the exposition.

Some of the depictions, which are each four by nine inches (10 by 23 centimeters), feature photos of the victims while others are more stylized, showing a man with his hair on fire, a silhouette or a snake.

"There is no direct correlation for each of the victims," Shandler said of the works, which took her three years to complete.

"It was a way to take all the pain and release it. It was cathartic," she said.

Sculptor Christopher Saucedo's two brothers, both New York City firefighters, responded to the attack, with one never to return.

Although Saucedo normally works with steel and other metals, he couldn't bear to create his 9/11 piece from metal, the only material left in the World Trade center after the attacks.

Pressing white linen pulp on blue handmade paper rectangles, Saucedo created three panels -- ethereal compositions on which the white linen forms what first appears to be a cloud, but on closer examination is in fact the World Trade Center buildings.

Also in the expo is a video by the Blue Man Group, a performance art collective, which was inspired by the scraps of paper from the World Trade Center that blew into the yard of their rehearsal space in Brooklyn after the attack.

A bronze statue of a woman falling to the ground, hand extended, pays homage to both the dead and living. Eric Fischl's "Tumbling Woman" is on loan from The Whitney Museum.

The art on display, born out of the tragedy, is a "counterpoint" to the museum's historical exhibition, said director Alice Greenwald.

While the museum's mission is factual, meant to tell the tale of September 11 and the people who lived and died in the attacks, the art exhibit is "intimate and spare," she said.

"It is a very contemplative space," she told AFP, during a visit organized for journalists.

The exhibit "will give us another way in to remembering that day and the array of emotions we have been through," she said.

Since opening in May 2014, the museum, built on the former site of the World Trade Center in lower Manhattan, has welcomed nearly seven million visitors, according to its president Joe Daniels.