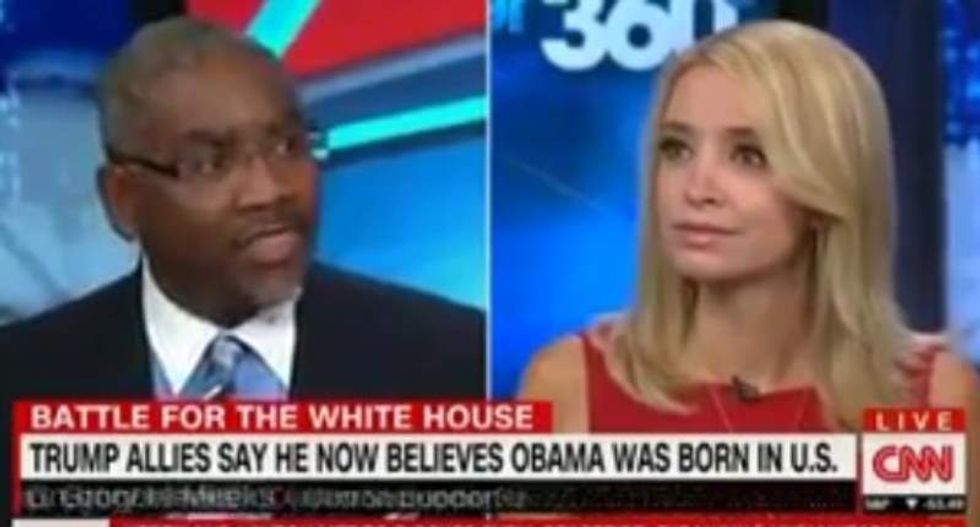 Rep. Gregory Meeks (D-NY) ran down Donald Trump supporter Kayleigh McEnany on Friday when she argued that Donald Trump had renounced "birtherism," even though he has refused to discuss the issue.

"He believes the evidence. He believes that the president was born here," she said. "And last time I checked Gallup's list of top issues, this wasn't on it."

"Then he should say it. If he believes it, he should say it," Meeks shot back. "There's a pattern with Donald Trump. I'm still looking -- and I'm sure that everybody's still looking -- for those 'thousands of Muslims' that were cheering during 9/11. That has not taken place. We heard video where he says he was for the war in Iraq. He now says he wasn't. There's not any evidence where he was against the war in Iraq."

"There's a lot of evidence," McEnany insisted. She did not identify any of it.

"They were found to be innocent. I still have not heard him apologize for that," said Meeks. "There is a practice and pattern with Donald Trump, who continues to make noise he knows is completely incorrect. He never apologizes about it. He leaves it out there. We heard his voice, claiming it was somebody else, talking to a reporter. And he still has not admitted it was him."