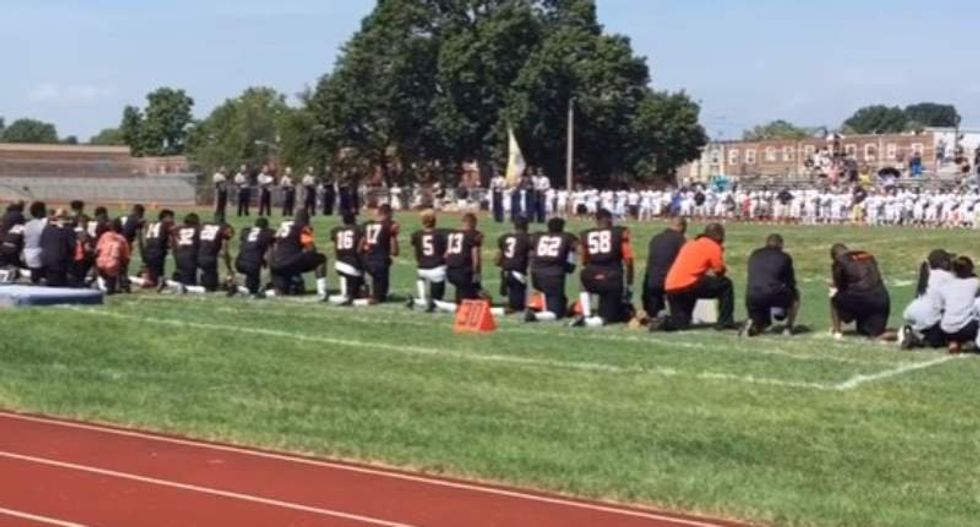 The Diocese of Camden in New Jersey preemptively threatened any football players under its jurisdiction with a two-game suspension should they choose to join San Francisco 49ers quarterback Colin Kaepernick's protests against police brutality, NJ.com reported.

"It is expected that our administration and coaches as well as our athletes will show respect during prayer, pledges and the playing or singing of the National Anthem," diocese superintendent Mary P. Boyle said in a letter to its schools. "The best approach is helping our young people understand that blood was sacrificed so that we all can enjoy the gifts of our faith and our country. However, let me be clear. We are not public institutions and free speech in all of its demonstrations, including protests is not a guaranteed right."

Boyle's directive came two days after coaches and players for a local public school, Woodrow Wilson High, knelt during the playing of the national anthem before their game on Saturday. Head coach Preston Brown said he planned to do so on Friday and informed his players, but did not require them to join him.

"I still love America. I have nothing against it, and I still love our military and all that they do but it was never a song that moved me. I always just closed my eyes and did it," Brown said of the move, adding that he did it in response to "recent events that happened the last couple years, things I experienced in college being an African-American student athlete in the South. I felt it was an appropriate time to do that."

The Camden City School District released its own statement supporting the decision.

"This is a personal issue, and we strongly respect our students' experiences and their exercising our country's First Amendment rights," the statement read. "Whether our students choose to stand, kneel, or otherwise, we're proud of their engagement with what is more broadly a very important social justice issue."