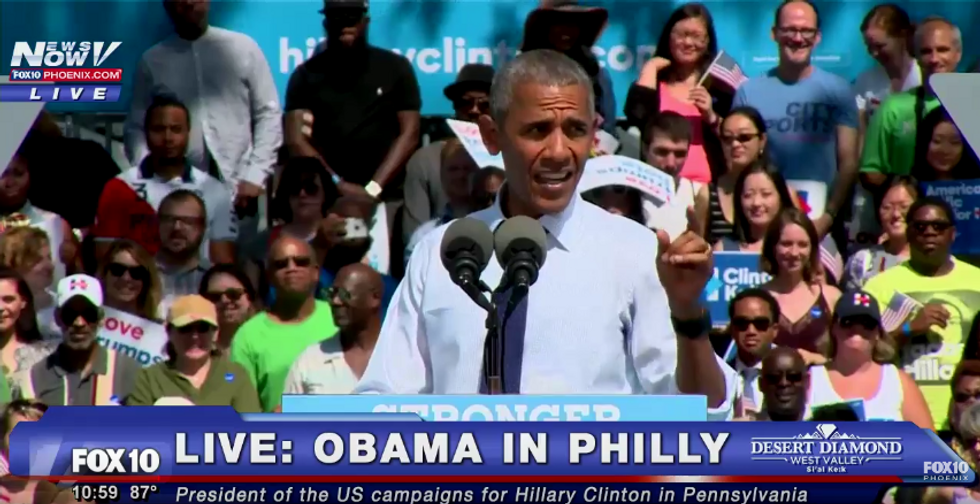 President Barack Obama has officially jumped off the bench and is hitting the campaign trail for Hillary Clinton.

As you might expect, he particularly relished the opportunity to tear into Republican presidential nominee Donald Trump, whom he ripped for posing as a fraudulent champion of working-class Americans and for knowing nothing about public policy.

Below, we've gone through Obama's best one-liners during his big speech on the campaign trail on Tuesday.

Obama couldn't believe that Trump had the nerve to portray himself as a working-class hero, despite the fact that he's regularly stiffed contractors who have done work for him.

"He's trying to spend most of his life staying as far away from working people as he could," he said. "He's not going to let you into his golf course... and suddenly he's going to be your champion?"

Obama shamed the press for focusing so much on the Clinton Foundation while barely touching Trump's incredibly shady charitable foundation that he hasn't personally donated to in 2008. In particular, he ripped Trump for spending $20,000 worth of money that other people donated to the foundation to buy a six-foot tall painting of himself at an auction.

"He had the taste not to go for the 10-foot version," Obama cracked.

3.) Obama laughs at the notion that Trump is qualified to be president because he's a successful businessman.

The idea that succeeding in business somehow makes you qualified to be president is ridiculous on its face, but that's particularly true when it comes to Donald Trump, who has faced multiple bankruptcies and who has lent his name to shady ventures such as Trump University.

"America's got a lot of businessmen and women who have succeeded without hiding their taxes returns, or leaving a trail of lawsuits, workers who didn't get paid, people feeling like they got cheated," Obama said.

While Obama acknowledged that there's nothing wrong with cutting deals with Russia, he said it was another thing entirely to actively praise Putin for his "strength" and "leadership."

"The Donald last week went on Russian state television to talk down our military and curry favor with Vladimir Putin," Obama chided. "I have to do business with Putin, but I don't go around calling him my role model."

5.) Obama rips Trump for being such a giant downer about everything.

Donald Trump has painted a bleak portrait of America during his campaign, and Obama sought to contrast this pessimism with the examples of past Republican presidents. In particular, he said the GOP under Trump was no longer "the party of Lincoln," and he said his vision for the country is vastly different from the one that Ronald Reagan had.

Check out the whole speech below -- Obama takes the stage at around the 10-minute mark.